FacebookTwitter
sell my story to woman's own 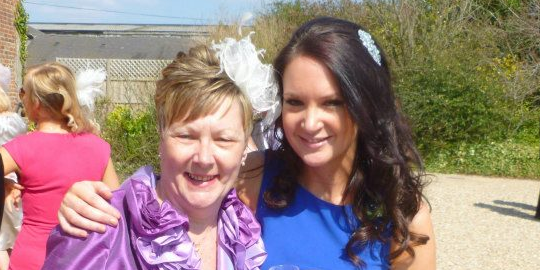 Our incredible journey to find one another.  Jo-Anna Sell’s story of being reunited with her birth mum following adoption appears in WOMAN’S OWN mag.

For years Jo-Anna Sell had carried a treasured handwritten letter written to her mum who gave her up for adoption as a baby. 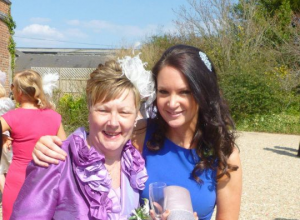 Given to her by her adoptive mum, the letter began, “Dear Daughter… If you are anything like me one day you will want to know all about why you were adopted… the one thing I want you to know above all else is that I love you…” but although she had searched for her birth mum – leaving profiles on Facebook, reunited websites and even applying to go on a TV show that finds people who’ve lost touch through adoption – her efforts had proved fruitless.

But one day she wrote a blog about how she felt – she tweeted it and from that blog, someone suggested she try another website. From that someone eventually put her in touch with her biological mum. It turned out both of them had been searching for one another.  Jo and her birth mum Elizabeth had even applied to go on the same ITV series, Long Lost Families – but bizarrely both of them hadn’t been picked.

Elizabeth had written a letter to Jo when she gave her up because she always wanted her to know she was very much loved. She still believes she did the right thing at the time. She was in her teens and had become pregnant by accident. Being a single mum was not an option in those days and despite adoring Jo as soon as she was born, she ended up giving her up for adoption.  Jo was adopted according to Elizabeth’s wishes by a lovely couple who couldn’t have children themselves, and has turned out happy and balanced. 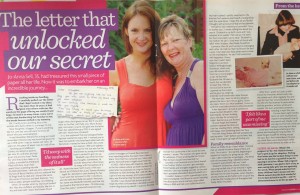 But almost as soon as she had given Jo up, Elizabeth deeply regretted it. Although she went on to meet another man and have a son, she always spoke to him of her lost daughter.

When she heard from son Lawrence that Jo had contacted him, she was overjoyed. Jo has now been introduced to dozens of cousins, aunts and uncles she never knew. Jo and her brother Lawrence have become firm friends with Jo and her partner even going to his wedding recently. Meanwhile Lizzie, as she is known to everyone else, and Jo  feel as if they have never been apart.

Jo said: “It was beautifully written and sensitively told.”

Do you have a story about the issue of adoption? At Featureworld we are experts at selling the most sensitive stories and ensuring they appear exactly as you want them to. Contact us using the form to the right of this page for confidential and independent advice about selling a story >>>

Category: sell my story to woman's ownBy Alison Smith-SquireAugust 8, 2013
Tags: adoption stories
Share this post
Share with FacebookShare with TwitterShare with PinterestShare with LinkedInShare with WhatsApp