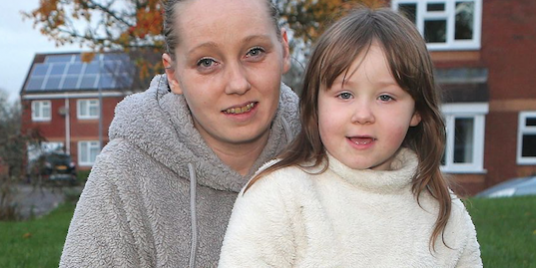 Mum Kate McGill was stunned to be told daughter Mya, five, was too young to play outside in front garden of her cul de sac… story in The Sun 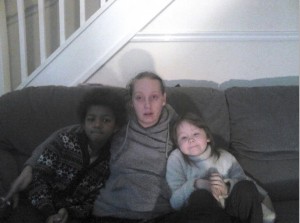 Kate with her children

So how old should your child be before you let them outside alone?

Kate McGill, 30, from Devizes, Wilts, came to Featureworld following a ‘spiteful complaint’ from an unknown neighbour who’d complained daughter Mya, 5, should not be outside with elder brother Calvin, ten.

It resulted in her getting a visit from a social worker saying her daughter was too young to play outside.

Kate said: “I was stunned when a social worker knocked on my door and told me Mya could not play out with her brother.

“I am a firm believer children should be outside in the fresh air.  Mya adores playing outdoors and I live in a quiet cul de sac with hardly any traffic.

“And she is never on her own in front of the house. I am always watching her from my kitchen window, which faces front.’

She added: ‘I am sick of people telling me how to bring up my kids. I can’t believe a busy body has nothing better to do than report me to social services for allowing my daughter to play outside.

“But it seems everyone these days – from teachers to passersby – feels the need to stick their noses in.”

The single mum was first visited by social services a year ago when Mya was spotted riding a bicycle on the green opposite to her house.

She said: “Mya was happily playing with her brother and his friends when this social worker turned up.

Kate in The Sun

“I was shocked when she said it was about Mya playing outside. I thought the government was trying to encourage parents to ensure their kids had more exercise outside, not less.

“Then she told me Mya must be supervised at all times by me when she is outside. She also said Calvin was too young to be responsible for Mya.

“However, I never make Calvin responsible for Mya because I have always got my eye on her.”

She continued: “Mya would hate to be cooped up inside the house.  I am a traditional parent who thinks come rain or shine kids should be playing and not cooped up in the house watching TV or glued to a computer.

“I was the youngest of three kids and I was always outside with my older brother and sister. We used to roam for miles and it never did me any harm.

“I accept we live in a different world these days and that’s why I only allow Mya into the front garden and green. But I don’t live on a main road and I only have to look out of my window to check Mya is OK.

‘As a result, unlike so many kids these days, Mya and Calvin are slim, healthy and active children.  I would much prefer they are using their imaginations playing hide and seek, tag and having races than stuck inside on a video game.”

Since the first visit, Kate claims she has been visited a number of times by social workers over the past few months. “Incredibly the social worker couldn’t tell me when she thinks Mya will be old enough to go outside so I didn’t find her advice very helpful.”

She admits: “There was one time Mya rode her bike in the road. But I immediately told her she must only cycle on the pavement and she has never come to any harm.

“The problem is Mya begs me to allow her to go outside with Calvin. And it is impossible for me to stand outside for hours just watching them – something I can easily do in the warmth of my kitchen.

“Because I have net curtains at the window I imagine some neighbours don’t think I’m there but Mya is my precious baby girl. There’s no way I would put her at any risk. I’m angry – it’s lot of fuss over nothing.”

A spokesperson for Wiltshire County Council said: “It would be inappropriate to comment on individual cases but these issues are often quite complex and don’t always relate to one particular incident. If concerns are raised with the council including by other statutory partners, we have a duty of care to investigate further and offer appropriate advice and support as required.”

What is the legal age for a child to play outside unsupervised?

Just like staying at home alone, there is no legal age limit for a child going out alone. The NSPCC says: “Getting the balance right between allowing children their independence and ensuring their safety when away from home can be difficult.” It recommends setting clear boundaries so your child is clear where he or she can or can’t go, talking about the risks and setting a curfew.

Do you let your young child walk to school or go to the shops alone? What are your views? Let me know for a possible follow up article.