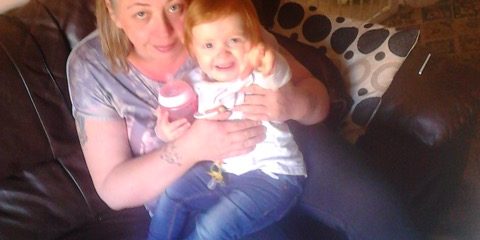 A story that will strike fear into every parent… 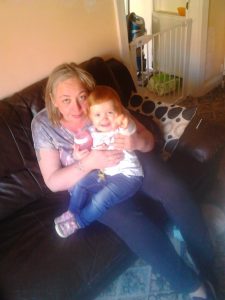 Mum Nicola Watters came to me after being accused of breaking her daughter’s arm.

Her daughter Lottie-Rose was just six days old, was taken into care by social services and Nicola and partner Adrian were arrested by Police

She was about to be adopted when she broke another bone in the foster parent’s care.

Lottie-Rose, now two, was immediately returned to mum – but the ramifications have proved enormous

Mum of four Nicola’s nightmare began when Lottie-Rose was six days old. Nicola, 40, a charity administrator, was showing off the latest addition to her family at church – her baby daughter Lottie-Rose – when she noticed her left arm was floppy.

Nicola and her partner, Lottie’s dad, Adrian 49, rushed their baby daughter to hospital. There doctors discovered Lottie’s arm was fractured.

Immediately doctors accused Nicola and her partner of hurting their own daughter. Despite both of them denying anything – and Adrian telling them he had been taking medication for brittle bones for 19 years –  doctors said it must be one of them.

Social Services were called and Lottie was immediately taken into care. Nicola and Adrian were arrested by Police. Even Nicola’s daughter, 15, was questioned over whether she had harmed Lottie and was jealous of her. 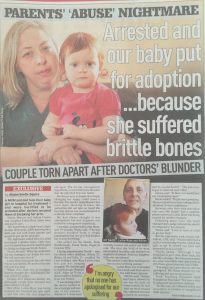 Nicola and Adrian in the Sunday People

Nicola and Adrian were only allowed to see Lottie-Rose six hours a week and also they blamed one another. Each of them knew they hadn’t harmed Lottie-Rose – and so they thought the other one must have.

Six weeks later adoption papers were being prepared for Lottie-Rose when her foster carer was getting her dressed and heard her arm snap.

She underwent tests to find where experts confirmed she has osteogenesis Imperfecta, the same disease as Adrian, and the fractures had occurred due to normal handling. Adrian had unwittingly passed it to his daughter.

Social Services realised their mistake and within 48 hours a judge ordered Lottie-Rose to be returned to her innocent parents.

She is now aged 18 months old but the ordeal has damaged family life forever.Nicola and her partner have split and Nicola still feels she missed out on six important bonding weeks of her daughter’s life. Although she knew it wasn’t her fault, it damaged her confidence as a mother.

Nicola decided to tell her story because she believes medical testing should always be thoroughly carried out before Social Services take such a drastic step as removing a baby.

You can read the story in the Sunday People newspaper here.

Nicola’s story has already been placed with a top women’s magazine.

Have you had a brush with social services? Have you been accused of harming your own child? Contact me for advice >>>

Category: Sell my story to the Mirror, Stories sold in 2016, Stories sold to newspapersBy Alison Smith-SquireMay 7, 2016
Tags: Baby storiessocial services story
Share this post
Share with FacebookShare with TwitterShare with PinterestShare with LinkedInShare with WhatsApp