Story in The Sun newspaper… 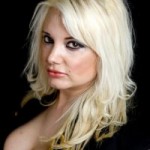 I gave up office work to pursue my perfect job: I make my living standing fully clothed on men’s backs in high heeled shoes…

After finding life in an office boring, Adrianna Taylor, 26, decided to pursue a different career… as a mistress.

Today Adrianna stamps on men, allows them to lick her feet and struts around in front of them in high heeled shoes. 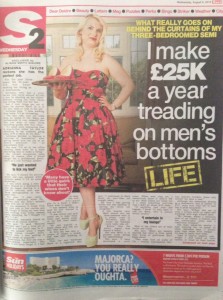 Adrianna in The Sun!

Another very sought after service is when she walks around in front of a man wearing tights in her high shoes.

She does all this from the comfort of her home, a suburban semi in Wiltshire. Adrianna – who works under the name Hallie –  has a boyfriend who understands her work and doesn’t get jealous. “He knows it doesn’t turn me on,” she says, “it is just a job like any other. But at the same time I adore giving men pleasure.”

Sadly her mother isn’t happy at all about what she does and she often just doesn’t tell friends or people she meets for the first time what she does.

However, her job means she can work from home and doesn’t need to commute to work – she can also fit it around the rest of her home life so she can take holidays when she wants. 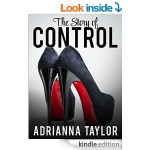 Following The Sun newspaper I got Adrianna an appearance on ITV This Morning and her story also appeared with a plug for her book on Mail Online…!