Attacked by an elephant story! Hayley Taylor’s shocking story about how she and her husband survived an elephant attack appears in TAKE A BREAK magazine… 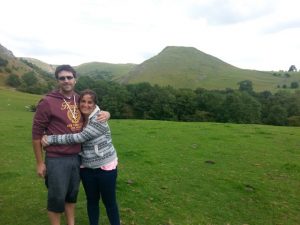 In the scramble to get away, Hayley tripped and the elephant attacked.

But her fiance came to her rescue – and was gored five times.

Luckily he survived and a month later the pair married.

A couple have told how a morning stroll while staying South Africa turned into a nightmare – after they were gored by a herd of elephants.

Dylan, who was gored four times, and fiancee Hayley spent ten days in hospital after a bull elephant charged.

Hayley tripped. And when Dylan went to help her, he was picked up and tossed by another elephant who joined in the attack.

The couple, both aged 28, were a month away from marrying at Tiger Safari chalets, a Zimbabwe tourist attraction.

After leaving the pair for dead, the elephants left trumpeting. 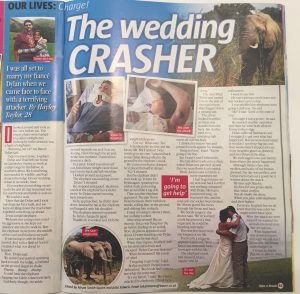 Hayley and Dylan in Take a Break…

Fortunately the couple were discovered by two locals who heard Hayley’s desperate screams – she believed Dylan who was tossed two metres into the air by one of the elephants and was covered in blood – had died.

In fact Dylan had been gored under his chin, twice on his shoulder and once on his back.

A taxi driver took the couple to a local hospital – they were then transferred to another hospital two hours away.

Dylan spent three hours in theatre. As well as being gored, Dylan had fractured six ribs, had a broken eye socket, broken nose and the tusk had punctured his lung.

Meanwhile Hayley had a haematoma on her arm and back.

Despite their injuries the couple were well enough to marry as planned a month later at Tiger Safaris with tens of friends from the UK flying over for the ceremony.

Although they have since had to have counselling for severe trauma following the attack in August 2014, they still look back and feel happy to be alive.

I placed their shocking story in Take a Break where it appeared on the cover and over two pages.

Sell my Story? Have you been attacked by an animal? If you would like to sell your story contact me for more advice >>>

Category: Stories sold in 2016, Stories sold to a magazine, Take a Break storiesBy Alison Smith-SquireMay 25, 2016
Tags: Shocking real-life
Share this post
Share with FacebookShare with TwitterShare with PinterestShare with LinkedInShare with WhatsApp