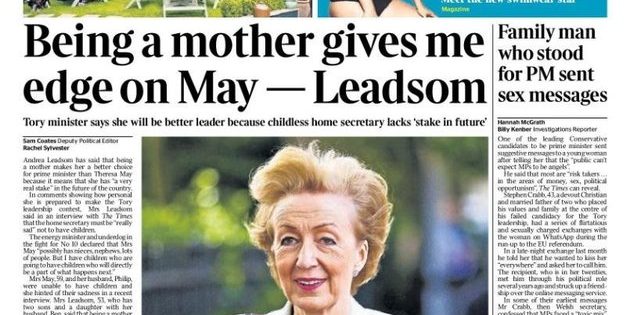 Andrea Leadsom – and her gaffe in the media… 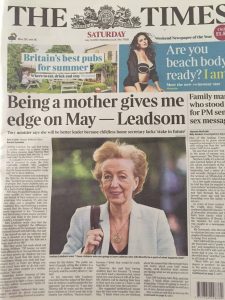 The article that brought Leadsom down…

So today Andrea Leadsom has pulled out of the race to become Prime Minister. Previously Leadsom, who was running to be our next Prime Minister, personally apologised for remarks she made about her having three children and her rival Theresa May not having any.

Whether you were a supporter of Leadsom or May, one thing is for sure – how you come over in the media is all important. After all, whether you like it or not, the media is very influential so if you want to get on, the best idea is to use it to your advantage.

Hence when Andrea Leadsom was granted an interview with The Times it should have been a gift. Yes, the paper supported Remain in the EU Referendum and has already come out in support of May. But that should have been a golden opportunity for Leadsom to be so persuasive she changes the mind of that paper – after all, there is no point in just talking to the converted is there…

It is in this interview with journalist from The Times that Leadsom said May ‘possibly has nieces, nephews, lots of people’ and then added ‘But I have children who are going to have children who will directly be a part of what happens next.’

Some people claim these remarks Leadsom made were somehow ‘twisted’ by The Times but the fact the paper produced a recording and a transcript – and she said it. She insinuated that because she has children she has more of a vested interest in the future of Britain.

The issue here is that many people might well feel – rightly or wrongly – that Leadsom does ‘have the edge’ (The Times headline) over her rival because she is a mother.

The mistake Leadsom made was this. Firstly, if you are hoping to be the next Prime Minister then the press are going to want to scrutinise everything you have to say. I am sorry but this is how it is – after all, you are going for the top job in the UK and so you will be given the interview, the grilling, of your life.

Then if you don’t think the contest should be about a particular issue, don’t be drawn on it at all. When asked about how being a mum affected her campaign Leadsom should have simply said, ‘I don’t think it affects it all’. End of.

But if you say something, then stick by what you say. Do not then make the biggest mistake of all – which is have a tantrum on Twitter accusing The Times of being the gutter press.

Yes there are some people who will always think the press twists everything – for them the media is to blame for all of the world’s problems! But this case is clear cut – The Times produced a tape recording and transcript and we all heard Andrea Leadsom say it. I don’t think for a minute that Leadsom meant to hurt May’s feelings or offend anyone who doesn’t have kids. But by making those remarks, what else could she have meant?

If Leadsom felt she was unfairly quoted then the last thing she should have done was immediately – before The Times even hit the stands – sounded off on social media. All that did was to fan the flames – it ensured all the other papers had a fantastic story, which was about an ‘explosive row’ (because Leadsom’s ill-judged tweets made it explosive!)

At the very least she should have waited for the public reaction to The Times story before saying anything. Then, if you want to complain publicly don’t put out statements on Twitter – say it calmly in a proper well-thought out press release.

As a media agent looking on, I am horrified that Leadsom has been so naive as she has frankly done everything wrong. Was she advised by any media expert at all? It seems not. Or maybe she was but her inexperience in dealing with the press meant she ended up doing what all loving mothers do – talking about her kids and how much they mean to her.

I imagine some people will say ‘the press brought Leadsom down’ but I am afraid if you can’t handle a very personable and professional journalist from The Times – and if one interview  upsets you so much – you should ask yourself, are you really suited to being Britain’s Prime Minister?

It appears Leadsom has asked that question and the events of the past few days have enabled her to come to the decision she isn’t suited after all.

Meanwhile if you are an ordinary person selling a story to the media ensure you are going to be 100 per cent happy with the way you are reported. Contact me for free and confidential advice >>>