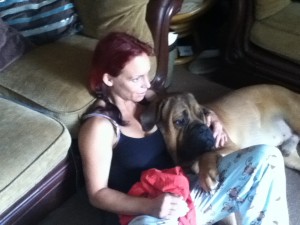 At Featureworld we pride ourselves in selling a story in multiple deals. So following publication of her story in The Sun newspaper and the Daily Mail we were delighted to place Angela Fielder’s story in Woman’s Own.

Angela had one of the more unusual stories we’ve come across. Dog lover Angela had been mauled badly three times by her bullmastiff, Boris

She’d ended up needing emergency surgery, 60 stitches and almost lost the use of her hand.

Yet controversially she refused to have Boris put down, claiming he hadn’t meant to do it and if he had meant it, she would have been killed.

She went on to say the bites were her own fault – because the attacks had happened when she was telling off new puppy Wallis and Boris was just being over-protective.

Angela’s story caused a huge amount of controversy – some pet owners believe she was right while other people believed it would only be a matter of time before Boris attacked Angela with fatal consequences. 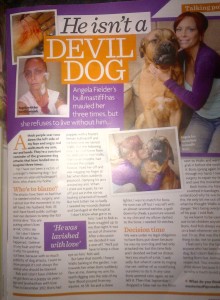 However, she has taken training steps to solve the problem and we are pleased to report Boris has not attacked Angela since.

Do you have an unusual pet story to sell? We are currently searching for more quirky pet stories for magazines. Perhaps you spend thousands on your pet or maybe your pet travels abroad with you? Whatever your pet story is, let us know using the form to the right of this page>>>

Find out more: How to gain multiple deals for your story.

Category: pet story, sell my story to woman's own, Stories sold in 2014, Stories sold to a magazineBy Alison Smith-SquireMay 7, 2014
Share this post
Share with FacebookShare with TwitterShare with PinterestShare with LinkedInShare with WhatsApp