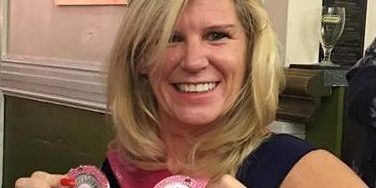 Pageant story: I meet two women who love appearing in pageants for The DAILY MAIL… 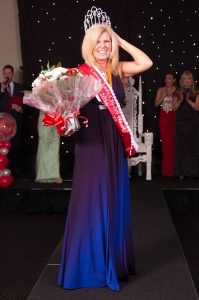 Would you take part in a beauty pageant?

Most people imagine pageants are just for children.

But while feminists might claim they are demeaning, a growing number of adult women claim taking part in a pageant is increasing their confidence…

When Shelley Reice 53, split from her husband – and she found herself supporting her mum who had cancer – it was a traumatic time. At the same time Shelley was juggling running her own care business while looking after her son, 17. She decided to do something for herself – which was go to a gym. And it was there that a personal trainer suggested she should try a beauty pageant.

Shelley (thank you to Ms Galaxy for putting me in contact with the delightful Shelley) did some research online and sent off a photo. She never expected to hear anything more. But to her amazement she was contacted to be told she was through to the next round. Since then Shelley has won accolades such as Ms Natural Beauty, Ms Personality, Ms Classic Lady, Ms Bristol Galaxy, Best Smile and Miss Charity. The first time she appeared in a bikini in front of judges was nerve racking but she also loved the buzz. And of course winning is the most amazing confidence boost of all.

Meanwhile when Carolyne Martin’s husband died from a brain tumour she was devastated. Naturally his death left a huge void in her life. Then a friend suggested taking part in a pageant. They have taken her into another world and have been a massive distraction from the grief, giving her a new lease of life. Carolyne, 67, a sales consultant, has three children who think it is a brilliant and are really proud of her. 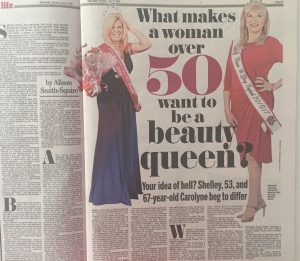 Shelley and Carolyne in the Daily Mail!

Contest Organiser Pam Boon, who runs Pam’s Pageants, told me: “We’ve definitely seen an increase in entries from older women over the past couple of years. Social media websites such as Instagram have made it fashionable once again for women to show off their looks. Ordinary women want that glamorous lifestyle they see online.”

She adds: ‘Beauty pageants are a way of having an independent person who is not your husband or friend, say: “You are attractive”. What can be more of a boost than that – especially if you’re hitting middle age and are worried you don’t look as good as you once did.’

Shelley and Carolyne both looked fab after enjoying a Daily Mail photoshoot complete with hair and make up. And I think their amazing stories make inspirational reading…!

Their stories appeared in the Daily Mail – read the full article online here.

Do you have an inspiring story to share with the world? Contact me to see if it could make a piece in a national newspaper or women’s magazine >>>