News UK chief Mike Darcey – whose company owns The Times, Sunday Times and The Sun – has caused quite a stir in the media world by saying ‘Don’t confuse Mail Online with a business based on professional journalism’, going on to claim that the Daily Mail website is a site based on copying and rewriting content from social media sites and other news outlets. 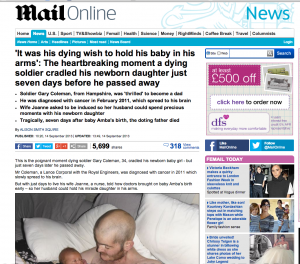 One of our stories on Mail Online…

Speaking at a conference organised by Enders Analysis he also said the Guardian, the UK’s other very popular news website, also offers no lessons for other publishers because it is ‘systematically loss-making’.

He adds: “When I say ‘professional journalism’ I am talking about the generators of news and informed comment, not simply those who redistribute the news generated by others.

“Because if all we have left is redistributors, then eventually there is nothing to distribute – someone has to dig out the story in the first place, establish its veracity and give it life.”

While at Featureworld we believe the hugely successful and popular Mail Online would take exception at being called a ‘news redistributor’ and would argue it does dig out stories, establish their veracity and give those stories life, it does make us wonder how the world of news would look if print didn’t exist and there were only digital websites instead.

And therein lies the problem – as fewer people buy a newspaper or magazine and instead rely on the internet for their reading – are free news websites killing off journalism?

Mr Darcey claims that even Mail Online with its millions of browsers, “remains unprofitable today … with staff numbers now at an astounding 450 or more.”

One of the issues that anyone selling stories to newspapers – be it the journalist or the interviewee – must face is that website use pays a lot less than print.

It takes time and money to source stories, check them out legally, do the interview, write them and sort photos (which often involve hair and make up plus styling as well as paying the photographer.) And that doesn’t include any payment made to an interviewee for their time or their exclusive story.

At the moment once an interviewee has been in a magazine they might decide to go on Mail Online or another free news website to gain further publicity (as it’s just online there will be a very small payment if any.)

But if all that were left is free news websites – which due to the disappointing revenues from internet ads, do not turn much if any profit and therefore couldn’t afford to pay to get the story off the ground in the first place – then it’s possible traditional journalism would die off because it becomes too expensive.

This of course would be a terrible situation for all of us as readers would simply be left with TV news (which follows up newspaper stories, rarely breaking its own news and is paid for in our licence fee and from advertising) and puffs from PR companies and celebrities. Many time consuming and costly health, real life and investigative news stories would simply not see the light of day as no-one is going to put in so much work for so little.

To put this is perspective, even following up someone’s blog for national publication will involve checking that blog out, dealing with any legal issues (more important than ever in this litigious age), doing professional photos, speaking with the author and gaining any permissions and writing it up in the style of the website. Then it has to be physically uploaded and laid out on that website. Someone has to do this, give their time and their expertise.

Mr Darcey – whose Sun and Times websites are all behind a pay wall and so are not available for free –  does give some ray of hope for the future by saying he believes print and digital can grow together.

Clearly however he believes the way forward would be for all papers to introduce some sort of paid for only access to their content saying its not achievable to make a profit “by giving away our hard work for free and hoping that online ad revenue will fund our future. The evidence is to the contrary.”

The problem is that the public has got used to getting its news and features for free. So how traditional journalism will survive in the future remains to be seen.