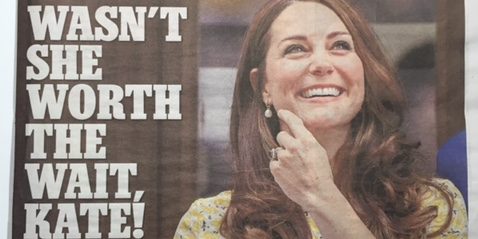 How the new Royals are snubbing the media – and the public… 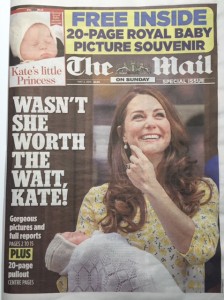 Call me an old softie but when I heard the Duchess of Cambridge had given birth to a little girl I was immediately transported to the wonderful moment a midwife announced ‘it’s a girl!’ at the delivery of my third baby (I also have two older sons.)

And I doubt I was the only person reminded how wonderful having a child is. After all, surely it is one of the most momentous moments of all of our lives – and whatever you think of the Royal family, the wonderful news of the arrival of a healthy baby is something many of us can relate to and want to celebrate.

What a shame then that the royal family felt the need to rush such a delightful moment – and such a historic one too. All quickly and swiftly done with within 12 hours with the media – and the public kept at arm’s length.

It is extremely fortunate modern cameras are able to take so many photos so fast. Because the amount of time we saw the Royals was pretty much over in a blink of an eye.

I never expected William to feel comfortable standing in public with toddler George and certainly no-one could have expected Kate, who had after all only just given birth, to have posed for photos with her newborn daughter very long.

But surely William – when he left Kate at hospital and went to pick up George – could have stopped for a few minutes to express his joy? It was utterly disappointing that William didn’t think to chat to reporters (and fans who’d camped out for days) about his new baby. All he had to say was a few choice lines about how thrilled he was, or how quick the birth was, or how Kate was overdue. Anything that gave insight into him being a normal dad would have been welcome.

Instead, having said nothing and basically just waved, I just got the feeling he wished everyone wasn’t there at all. He got in his car as swiftly as possible – and certainly ushered his family away as fast as he could.

I feel genuinely sorry for colleagues who had to report on this. Anyone who has drummed up thousands of words on the few minutes we saw them deserves a medal for writing. Because the bottom line is they managed to make stories out of nothing.

Writing up these reports must surely be made more difficult by the fact it appears these days no national newspaper dares to criticise the Royal family.

They also don’t dare to publish any photos that aren’t official ones okayed by Clarence House (a photographer taking pictures of George in a public park was recently threatened with legal action and any newspaper would be too frightened to print them anyway so it was a pointless exercise).  Certainly no paper it seems would dare to say what I am saying here even though you can be sure many thought it.

As it’s reported the four of them will be hiding away in remotest Norfolk, I suspect it will be months before we see anything of this young family (going to see his baby sister was the first time George has been photographed on British soil since his birth.)

No-one is denying a young family, even a royal one, needs a private life – but at the same time they are public figures, publicly funded.  As such surely if they want to remain favourites with the public, they need to be seen.

What do you think? Do let me know…