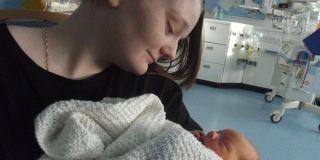 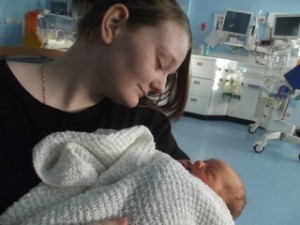 Precious. Karli thanks her baby for saving her life…

For years Karli had suffered from itchy legs. Being pregnant meant finally doctors took Karli’s itchy legs seriously. But even they were shocked at the cause…

In 2009 Karli McIntosh, 21, began getting itchy legs. She had no idea what was causing it but over the next year she visited her GP around 20 times. She was given anti-itch tablets and antihistamines but nothing worked.

Then she got pregnant with her son. Karli and partner Chris were thrilled – only the itching got worse. Now she was itching on her tummy as well. This time doctors took it seriously and ran tests. When the results came back, Karli was shocked to find out her itching was the result of liver failure caused by a condition known as autoimmune hepatitis.

Although some itching is pregnancy related, in her case it wasn’t. Autoimmune Hepatitis is thought to be caused by a virus, although no-one is sure what causes it but it usually affects older people.

An incurable condition the autoimmune hepatitis was the cause of the itching and it was destroying her liver. A doctor told Karli had it not been discovered she could have been dead in five years.

However, it was also dangerous for her baby as her liver was failing. Pregnancy was also putting too much stress on her body. It meant baby Flynn had to be born a month early.

Although he had to go into special care, luckily he was healthy.

Karli’s condition is now controlled by drugs. However, had she not got pregnant and it hadn’t been picked up, then it could have progressed so far it could have killed her. 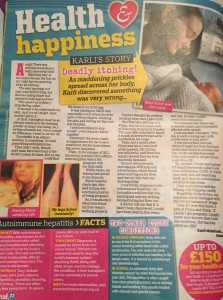 She is so grateful that she got pregnant as Flynn saved her life.

She said: “This condition isn’t always well recognised by medical professionals. I hope telling my story in a magazine like this will encourage anyone else who suffers from severe unexplained itching as I did to seek help from their GP.”

Have you suffered from an unusual medical condition? If you have a health story to sell, contact me in confidence >>>

Category: sell my story to Real People, Stories sold in 2015, Stories sold to a magazineBy Alison Smith-SquireFebruary 6, 2015
Tags: Health storiesPregnancy stories
Share this post
Share with FacebookShare with TwitterShare with PinterestShare with LinkedInShare with WhatsApp