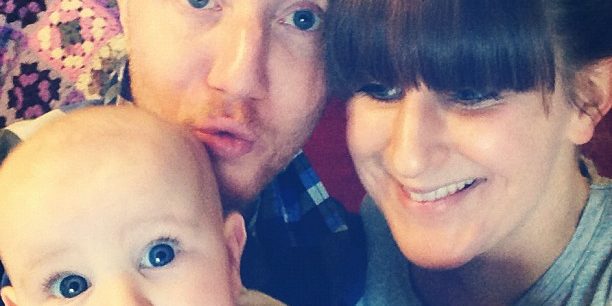 Ben Lindon is believed to be the youngest person in the UK to have had so many rounds of chemotherapy. Despite being told he can never have kids, his fiancee has given birth to a healthy baby girl – and their amazing story appeared on the DAILY MAIL website. 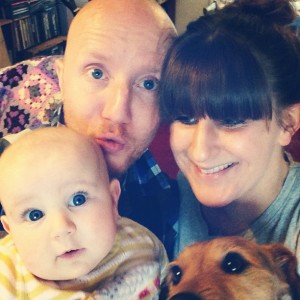 We champion every story that comes to Featureworld. But we were particularly touched by the poignant story of Ben Lindon and his fiancee Kate McCreanor.

For despite having endured over 54 cycles of chemotherapy for an inoperable brain tumour,  Ben has defied doctors – by fathering an adorable baby girl.

Ben, 34, was devastated by his diagnosis. But worst was the news that he would never become a dad.

However, shortly after finding out he had a tumour, he was introduced to Kate. And against all the odds she became pregnant naturally with little Martha being born healthily nine months ago.

Ben, a tree surgeon, was told after just one round of chemo that he would be infertile. He had wanted to freeze sperm but was told the brain tumour was so large that there wasn’t time.

A keen runner, he was first diagnosed in March 2008 after his left arm went numb and he collapsed while running. 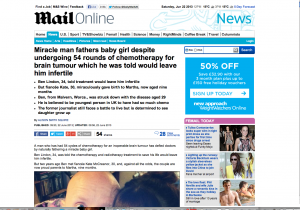 it turned out he’d had a seizure and tests later revealed an inoperable grade 2 gioblastoma multiforme tumour.

When he met Kate, he faced having to tell her he not only had a brain tumour. Despite this, she fell in love with him and the couple are now set to wed next year.

Ben and Kate wanted to tell their story to raise money for Brain Tumour Research and also to show that even when you are diagnosed with something so life-changing,  there is a future. Life still carries on and should be lived to the full – something that Ben truly does.

Their story appeared on the Daily Mail’s incredibly well-read site, MailOnline. It was recently revealed that MailOnline has more than 130million monthly users. Around eight million browse the website daily and it is the most popular newspaper website in the UK. It is also read by millions abroad.

MailOnline gave Ben, who is raising funds for Brain Tumour Research by competing in the Three Peaks Challenge tackling the highest mountains in England, Scotland and Wales over September 27-29, a link to his website so readers can sponsor him. To donate go to: http://www.justgiving.com/Ben-Lindon.

To read the family’s inspirational story in full go to: Ben’s story in the Daily Mail.

Meanwhile, if you want to sell a story for charity, contact Featureworld to the right of this page>>>