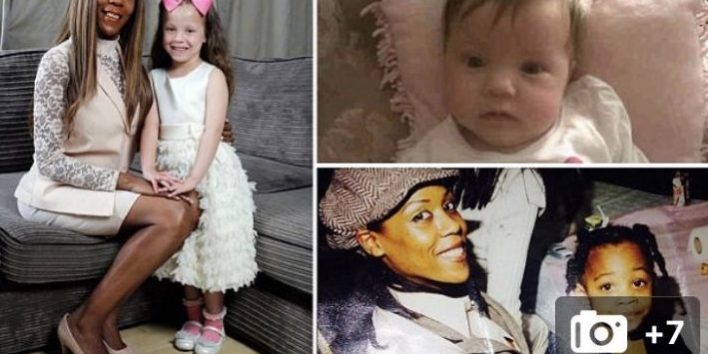 She IS REALLY mine, says black mum of her one in a million white blue-eyed daughter … Story in the Daily Mail 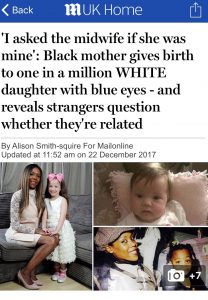 Like many mothers when Sophia Blake, a 45-year-old marketing executive gave birth to her daughter Tiara, she expected she would bear more than a passing resemblance to her.

Tiara’s father is white but Sophia is black and at the very least she thought her baby girl would be a mixture of both of them.

So she was shocked when she produced a blue eyed white baby daughter with straight hair.

Sophia’s first thought was to ask the midwife if Tiara really was her little girl!

Sophia, who is estranged from Tiara’s father, thought her daughter’s hair and skin would darken as she grew older. Instead it stayed exactly the same and Tiara has grown into a beautiful – albeit white, blue eyed – little girl.

The fact mother and daughter don’t look anything alike does cause enormous difficulties now – because people do not believe they are even related – and they can’t go out together without attracting attention.

Tiara has asked her mother why they don’t look alike and her mother worries it is confusing for her to have a black family but be completely white. 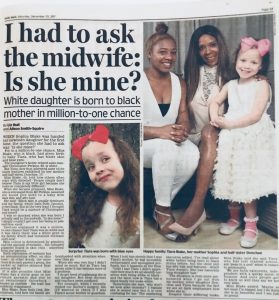 To make matters more complicated, Sophia has a daughter from a previous relationship with a black man who is completely black. No one ever believes her daughters are actually sisters.

Sophia decided to speak out to raise awareness that mixed race children can also be very white or very black – although she adds when it comes to personality she and Tiara are like peas from the same pod’. She is also very proud of her beautiful daughter.

A black woman producing a white baby with a white man is a one in a million genetic occurrence as it is much more likely that any baby produced will be black or a mixture of the two skin colours.

Do you have a similar story to tell? Contact me for free advice!