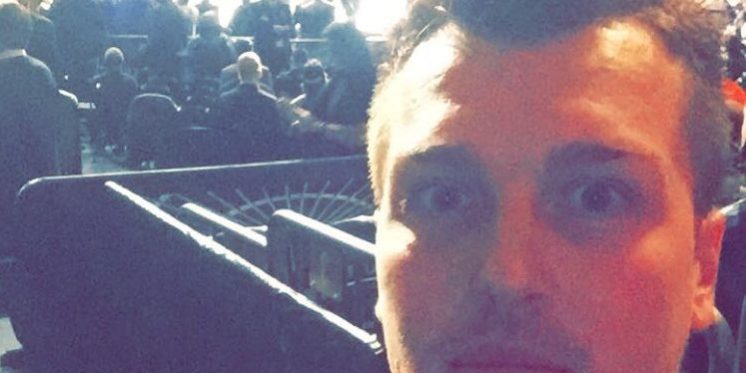 Story about Steve Curruthers from Hull appears on Mirror Online… 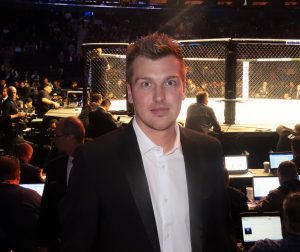 Celebrities Zac Efron, Gordon Ramsey, Swizz Beats, Demi Lovato and Conor McGregor even believe he is a VIP and pose for selfies with him

Shakes hands with Huge Jackman and chats with Madonna

Astonishing video shows how he got past the tightest of security

A British business graduate was treated as a VIP – after blagging his way to a £5,000 ringside seat at the Conor McGregor UFC fight.

Brazen Steve Carruthers, 25, from Hull, donned his best suit and slipped past security after convincing them he was a VIP.

The shameless chancer even convinced Conor McGregor himself that he was part of a special VIP entourage – getting him to pose for photos.

Incredibly Steve, who last year blagged his way to a ringside seat at the Floyd Mayweather ‘fight of the century’ in Las Vegas last year to mingle with Donald Trump, Michael J Fox, and Leo DiCaprio, snap chatted his exploits to thousands of fans – and even managed to video himself.

Steve said: “I arrived at the event suited and booted to blend in. But security was tight so I knew I’d have to be patient.” 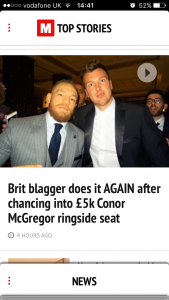 After first getting knocked back when a bouncer asked for a ticket, Steve tried again.

He said: “I walked behind a woman when she was having her ticket scanned. Then because I was in a suit and shoes, the person on the door of the VIP UFC suite didn’t ask me to show my ticket. On walking in I realised I’d managed to get into the event for free.

“In and around the ringside as well as in the VIP suite I took photos with Swizz Beats, Demi Lovato, Zac Efron and Gordon Ramsey.

“I was amazed to see the queen of pop Madonna and asked her for a photo but she replied, ‘sorry not right now’. I also saw Hugh Jackman and got a handshake.”

After watching the fight Steve then turned up at Conor McGregor’s hotel. He said: “I’d got chatting to Conor’s training partner Dillon Danis who suggested I might catch him at the Marriot where he was staying.

“After a couple of hours in the hotel lobby, Conor McGregor rolled up in his Rolls Royce at 5.30am. After explaining I’d come from England to see the fight, I asked for a photo and he obliged.”

He added: “People seem amazed anyone can get into something like this for free – let alone video myself doing it. I admit it isn’t easy. But It shows how confidence and a decent suit can get you anywhere.”

Have you blagged your way into a VIP do? Let me know – send your photos and footage via the sell my story form >>>

Category: Sell my story to the Mirror, Stories sold in 2016, Stories sold to newspapersBy Alison Smith-SquireNovember 14, 2016
Tags: video stories
Share this post
Share with FacebookShare with TwitterShare with PinterestShare with LinkedInShare with WhatsApp