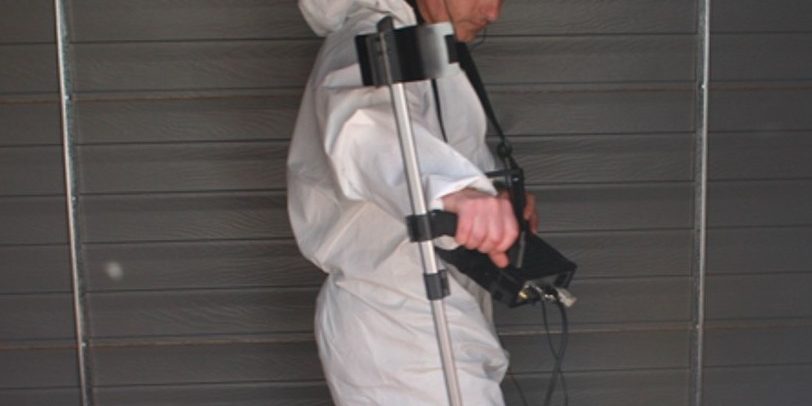 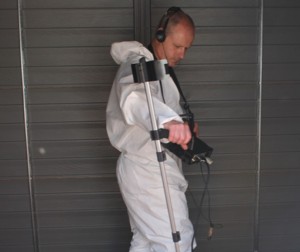 After spending years painstakingly piecing the tiniest details together, Peter Faulding, a key witness at the inquest of Gareth Williams believes the spy was working undercover as a woman.

A coroner previously ruled that Mr Williams was unlawfully killed and that his death was likely to have been the result of criminal actions. But a Scotland Yard investigation later claimed Mr Williams had locked himself in the bag by accident.

Exactly what spy work Mr Williams was involved with has never come out due to national security reasons.

But how and why Mr Williams’s body came to be found in the bag in a bathtub at his London home in 2015 has long been the subject of various theories, including as women’s clothes were found in his flat, that his death was the result of some bizarre sex game which went wrong.

But Peter Faulding, who gave forensic evidence at the inquest tells how he has studied his death further – and he now believes he knows what really happened.

Speaking out publicly for the first time since he finished piecing the story together, Peter Faulding, claims that £20,000 worth of women’s designer clothes found in his flat were given to him by MI6 bosses as part of his job.

He says with his fine features slim 5ft 7″ Mr Williams, an maths expert who is believed to have worked as a codebreaker, made the perfect spy – because he could pass himself off as a woman.

Peter, who is renowned for shedding light on cold cases, points to the fact a red wig and grey dress – possibly recently worn –  was found hanging over a chair in Mr Williams’ flat.

Mr Williams, a super-fit cyclist, also shaved his legs – something many sportsmen do – and disguises have been used by spies for centuries.

Peter believes Mr Williams was killed by a foreign agent who broke into his flat while he was asleep, poisoned him, put his body in the holdall and then put the holdall in the bath tub.

Peter, a world leading expert on confined spaces, was called in by the Police to work out if it would be possible for Mr Williams to lock himself in the holdall. He found it was impossible. And an inquest agreed.

However, the Met Police said they thought Mr Williams had accidentally locked himself into the bag.

Incredibly, however, given his job as a spy no-one has ever thought that the expensive clothes stacked in a spare room could have been used for his job.

“It’s time to recognise Gareth Williams was a hero serving his country on active service, he says, and he should be honoured for his ingenuity.”

Read the story in The Sun on Sunday.

Do you have a real-life crime story to sell? Contact me for free advice.

Read the full story below…

The story in The Sun on Sunday…

That is the astonishing theory put forward by the forensic investigator who gave evidence at the inquest into the agent’s death. Peter Faulding – who is renowned for shedding light on ‘cold cases’  has revisited the evidence and claims:

* THERE was a wig made from red hair hanging over a chair after the death;

* NEIGHBOURS claim they only saw a woman coming and going – not Mr Williams; and

* THE 5ft 7ins slimly built agent had shaved his legs at the time of his death.

Peter, a key professional witness called in by the police to help investigate the agent’s death, said: “With his fine facial features I’m certain Gareth Williams made a very convincing female.

“With his slim build he would have been sought after by bosses who must have believed they’d found the perfect person – a male spy who could easily pass as a woman.

“Undoubtedly his disguise would have enabled him to access places a man couldn’t.  And I think he could have been working on a job as a woman at the time of his death.

“He was the ultimate spy – a woman with all the brute strength of a man.”

He adds: “Here was a super-fit person. He was a man who was into his sport – and therefore likely to be fitter and stronger than most men – presenting himself as a woman.

“Disguises have been used for centuries by spies. What could be more ingenious?”

Peter claims the £20,000 worth of designer clothes – including labels such as Stella McCartney and Christian Louboutin – found in the flat were bought for Mr Williams by his employer.

He said: “I was informed about the clothes by the police investigation team when I visited the flat.

“I believe the clothes, stacked in a spare room, in bags similar to the one Mr Williams was found in, are key to this case. But bizarrely they were brushed aside by investigators.

“Mr Williams couldn’t afford to splash out on £20,000 of designer clothing and he obviously didn’t really care about them either.  These were expensive clothes but were not lovingly hung up – they had been bought for him not by him.

“It was a very clever idea. Gareth wasn’t particularly tall for a man, he was slim, with feminine features.

“And as a cyclist he shaved his legs – something many sportsmen do – which made made his undercover persona as a woman extremely plausible. It would have allowed him to carry out surveillance at a distance without being compromised, especially in high class establishments in London or any other big city.

“The glamorous red wig and a grey dress were found on a chair in his flat which shows they had been worn very recently, possibly that day.

“And his neighbours had not seen a man leaving that home – just a woman.

“He could have been doing any number of cases. Working in any kind of scenario as a woman.

“He went to a drag show before his death.  It could be the drag place was part of his investigations as an MI6 agent. Or it could be he was visiting for research.

“The key question which was never asked was were these clothes used by Williams for his JOB. I am certain they were.”

It is just over five years since Mr Williams – believed to be a codebreaker – was found naked in a padlocked 32in by 19in bag in the bath of his flat in Pimlico, Central London.

An inquest – where for national security reasons it was forbidden to discuss publicly exactly what Mr Williams’ work involved as a spy – ruled he had ‘on the balance of probabilities been killed unlawfully’.

But a subsequent investigation by the Met Police said they believed the maths genius and expert cryptographer had inadvertently killed himself – and his death was not related to his job as a spy.

Today the case remains one of Britain’s most mysterious unsolved cases.

But Peter said: “Having re-examined all the evidence in detail, I believe Mr Williams was murdered by a foreign intelligence agency.

“His killer probably climbed through he rear window and killed him while he was asleep. He could have been poisoned – someone who knew what they were doing would have used a poison known to be extremely difficult to detect.

“That’s why he was naked in the bag.  And indeed the murderer himself, if he was a man, might also have walked out of the flat maybe dressed as a woman.”

Peter, a world-leading expert on confined spaces and a forensic research specialist first became involved when the police asked him to examine how he believed Mr Williams’ body had come to be found inside the holdall.

He said: “I personally visited Mr Williams’ flat. I looked at whether it would be possible to climb into the bag inside the bath, zip it closed and padlock it. I also carried out oxygen depletion tests to find out how long it would take Gareth to suffocate once zipped in.

“I proved it was impossible to padlock it from inside the bag and the lack of oxygen means he would have quickly perished.

“The holdall containing the body was placed in the bath to ensure decomposition fluids would run down the plughole, the shower screen was closed, the bathroom door was closed to mask the smell and the lights were turned off. In addition although it was August the heating had been turned up to speed up decomposition.”

Mr Williams, a keen cyclist originally from Anglesey, North Wales, died shortly after returning from a hacking conference in America.

Shortly before his body was discovered on August 23rd 2010 he had seen a drag queen show.  Eight days later his body was found in he bag, his mobile phone and sim cards laid out on a table.  The last computer evidence of him being alive showed him at 1.15am looking at a cycling website.

Peter, whose organisation Specialist Group International has also worked on high profile missing person and murder cases such as serial killer Peter Tobin and April Jones, said: “At the inquest it was mooted whether or not Mr Williams had any suicidal tendencies but he did not. It was also suggested his death might have been the result of some sort of bizarre sex game gone wrong.

“At the inquest it was not my job to say if I believed Mr Williams was murdered or not.

“But on examining the evidence I believe everything was too surgical, too precise to have been some sort of sex game.

“For example, his iPhone had all the data wiped by a factory reset and if the Police are right – and he did kill himself – why was his DNA not found on the lock of the bag, shower screen, bath or bathroom door?”

Peter is speaking out after reading recent reports from a source claiming that Mr Williams – a man relatives claim did not enjoy the ‘flash car … and drinking culture” of MI6 – was killed because he had illegally hacked into secret data on Bill Clinton.

He said: “It’s time to recognise Gareth Williams was a hero serving his country on active service. And he should be honoured for his ingenuity.”