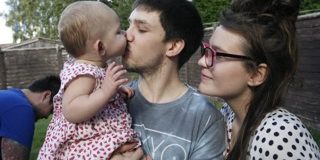 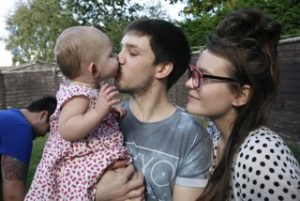 Amelie with her proud parents…

Sepsis UK Trust says she is the youngest known survivor

Luckily her condition was spotted by doctors which saved her life

With her beautiful smile it’s hard to believe that little Amelie Perry is Britain’s youngest survivor of sepsis.

Although she was born weighing what appeared to be a healthy 8Ib 8oz she wasn’t breathing and was rushed into intensive care within hours of being born. 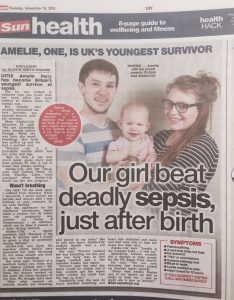 The family in The Sun newspaper!

There doctors discovered she was suffering from septicaemia caught from an infection unwittingly passed to her by her mum.

Mum Alaska-Lily, 18, tested positive for Group B Streptococcus during labour and was given antibiotics.

But the infection had already passed to Amelie, who wasn’t breathing when she was born.

Doctors, who didn’t realise at the time Amelie had contracted the infection, managed to get her breathing and thought she’d be fine.

But shortly after Alaska-Lily noticed her daughter had a red mottled rash and was breathing too fast. Little Amelie’s body was also puffy – something the midwife said was just due to the birth.

She was taken to intensive care where tests revealed Amelie was suffering from sepsis.

Sepsis arises when the body responds abnormally to an infection often caused by common bacteria and injures its own tissues and organs. If not treated promptly it leads to shock, multiple organ failure and death.

Amelie’s tiny limbs had started to swell dangerously as her immune system went into overdrive to cope with the infection.

Luckily doctors recognised it quickly as sepsis can maim within hours. 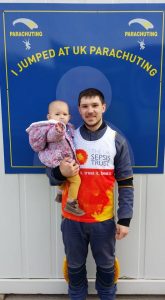 Callum does a skydive for UK Sepsis Trust

The Sepsis trust says Amelie is the youngest survivor of this potentially lethal disease.

Amelie, who is celebrating her first birthday is now healthy and learning to walk.

Meanwhile dad Callum recently did a skydive for UK Sepsis Trust which tweeted their congratulations to the youngest survivor of sepsis in Britain. The family wanted to tell their story to raise awareness and their story appeared in health section of The Sun newspaper.

Want to raise awareness by putting your story in the national press? Contact me for free advice >>>