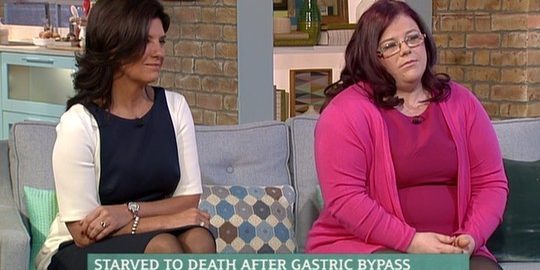 But Chantel is too overwhelmed with emotion to carry on with the interview. 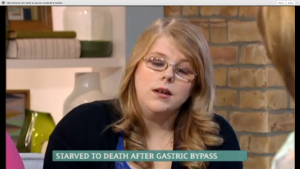 Chantel on This Morning…

Following publication of her story in the Sunday People and the Daily Mail, Chantel Graf bravely went on ITV This Morning with sister Melissa. Tragically their mum Angela Jones died in 2014 after starving to death.

She had undergone a gastric bypass four years earlier. But after the op Angela was left unable to eat properly and she died aged 42 weighing just 5 stones.

It has been an amazing and yet traumatic week for Chantel. When she came to me to get her story into the press, she simply wanted to raise awareness of the dangers of gastric weight loss surgery.

It then appeared on the front page of the Sunday People and from then on the week became a whirlwind of interviews as the devastating story of how her mum died went round the world.

Therefore it’s no surprise perhaps that as Chantel sat on the sofa with sister Melissa talking to presenters Eamonn Holmes and Ruth Langsford – and photos of her late mother were flashed on the screen – that she felt overcome with emotion. 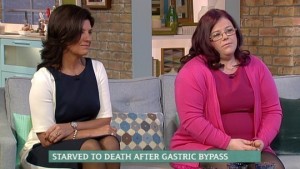 Melissa with Dr Dawn on This Morning

Sadly Chantel was unable to continue and had to be helped off by Eamonn Holmes. She told me later: “I choked and started crying. It was really sudden.”

Fortunately Melissa had accompanied Chantel onto This Morning and she was able to continue talking about how and why their mum died.

ITV This Morning’s Dr Dawn was on hand to give some insight. She said their mum Angela had been extremely overweight and had been warned by doctors she could die unless she lost weight. This is why she was given a bypass, which unlike a gastric band, is not reversible.

It works by stopping the small bowel from absorbing so much food – so leading to weight loss.

However an unpleasant side effect can be that sugar is sometimes too easily absorbed when someone who’s had a bypass eats. This can make that person feel sick and lead to the fear of food that Angela then suffered from.

Nevertheless Melissa said she still believed people are not aware of the side effects of a gastric bypass and anyone considering having one should think twice.

Chantel and Melissa’s story has now been placed with a magazine.

Of her experience selling a story via Featureworld, Chantel said: “You have done so much for me. I am so grateful and I am so glad you took on my story.”

If you would like the chance to tell your story on ITV This Morning, contact me using the form to the right of this page >>>