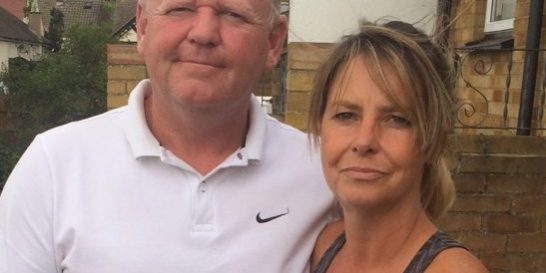 Cancer Misdiagnosis: Lisa Brewer’s story about how she was left wrongly fearing for her life appears in BELLA mag… 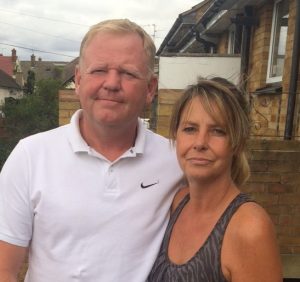 Lisa and her husband

Lisa was misdiagnosed with breast cancer thought to have spread

Underwent life saving surgery and prepared herself for chemotherapy

A mother of four has told of her devastation after undergoing invasive surgery for a breast cancer she never had.

Lisa, 45,  a carer, has been left with a deformed breast after bungling doctors confused biopsy test results with those of another patient.

Following an operation to remove what doctors believed was a cancerous lump, they even told her they feared the cancer had spread.

But it was only after being forced to wait a further agonising fortnight for those results that Lisa was told the truth – she was the victim of a ‘hospital admin mix up’ and the lump was harmless.

Lisa has now been undergoing counselling. She claims damage to her breast caused by the unnecessary surgery has spoilt her enjoyment of sex with her husband and she now faces further corrective operations to try and right the damage. 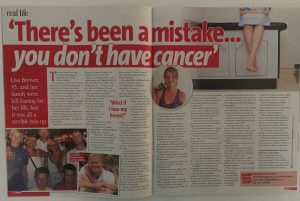 The story in Bella mag

In addition she was forced to tell her children and family she had breast cancer – and as doctors thought it might have spread, she had begun putting her affairs in order.

The misdiagnosis occurred earlier this year (2016) when Lisa went to her GP with a lump.

After being referred for further investigations doctors reassured her they believed it was a harmless fibroadenoma but did a biopsy only to double check.

She was horrified when she went back to the consultant and was told they’d found a serious case of breast cancer.

The hospital has now admitted liability and apologised to Lisa. They discovered the name label on her biopsy had been inadvertently swapped with another woman’s biopsy. While the other woman was wrongly given the all-clear, Lisa was wrongly told she had an invasive ductal breast cancer and underwent surgery. As well as surgery to remove the lump, which deformed her breast, she had lymph nodes removed and was told to prepare for the worst. It was only when pathologists examined the lump from the operation and found there were no cancer cells, that the alarm was raised.

She said: “At first I was overjoyed that I didn’t have cancer after all. But then the trauma set in. I had feared the worst and I also worried about the other woman who was wrongly given the all clear. I am now undergoing counselling. I have had an operation I didn’t need which has left my breast deformed and I will need further corrective surgery. My life will never be the same again.”

Lisa wanted her story published to encourage everyone to seek a second opinion. Her story appeared over two pages of Bella magazine.

Have you been misdiagnosed? Maybe like Lisa you were told you had cancer when you didn’t or perhaps you were wrongly given the all clear? Simply send your cancer misdiagnosis story to me via the form to the right of this page…

Category: Sell my story to Bella magazine., Stories sold in 2016, Stories sold to a magazineBy Alison Smith-SquireOctober 13, 2016
Tags: Cancer storiesHealth stories
Share this post
Share with FacebookShare with TwitterShare with PinterestShare with LinkedInShare with WhatsApp