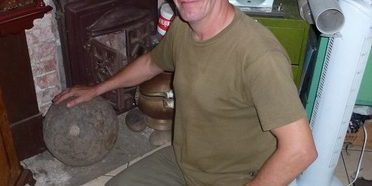 For twenty years Steve Attfield’s giant cannonball took pride of place as an ornament on his fireplace. 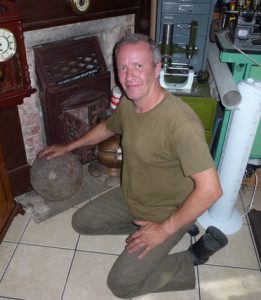 Steve with his beloved cannonball

The hobbyist collector, 56, had driven the 200-year-old artefact back in his car after picking it up on holiday in France.

Although partner Beverley Heath, 47, never liked it, she duly dusted the cannonball which became talking point amongst visitors.

Mr Attfield contacted Featureworld with his extraordinary story shortly before his cannonball was removed by specialist bomb squad officers from his three-bed semi in Croydon, Surrey. He had discovered it was packed with charge and could have detonated at any time.

The clock maker said: “I was horrified when I read a similar cannonball as mine was dug up on a building site and taken away for a controlled explosion.

‘A shiver went down my spine when I read “the explosives can still be quite volatile even after 200 years.”

‘At that point I didn’t feel comfortable having my prize cannon ball in the house. I was shocked. For twenty years the cannon ball had been sitting by the burning fire. It has been well looked after, and until I read about this other cannonball, Beverley dusted it regularly.’

After ringing a museum, they recommended he called the Police. And within twenty minutes two explosives experts arrived to carefully remove the 250Ib device.

Mr Attfield said: ‘They explained while our road didn’t need to be evacuated all precaution needed to be taken. It is terrifying to think the cannonball could have exploded at any minute and killed us.’

The artefact, believed to be packed with gunpowder, dates back to the 1700s when it was fired from a cannon in the castle Mont Saint-Michel, Normandy. It landed in soft ground two miles from the castle but didn’t explode. It was buried until 1997 when during building work it was discovered. Mr Attfield was on holiday and asked builders if he could have it.

He recalls: ‘I stuck it in the back of my car and drove the seven hour 400 bumpy miles back to the UK. Once home I rolled it through the front door and set it at the side of the fireplace. It looked perfect there and that was where it stayed for the next twenty years becoming a real talking point amongst visitors.’

However, Miss Heath, a housewife said: ‘Steve is a collector – we have a suit of armour which used to be in the sitting room until I banished it to the hallway.

‘Never did I believe, however, that his collecting hobby could be harmful in any way. Despite this cannonball being a potential deathtrap, Steve was sad to see it being removed. But I am glad to see the back of it.’

A spokesperson for the Metropolitan Police said: ‘Police were called to a residential property following concerns regarding a historic ordnance.

The ordnance, a cannonball, was collected by specialist officers.’

Quirky story to sell to the Daily Mail or another newspaper? Contact me for free advice >>>