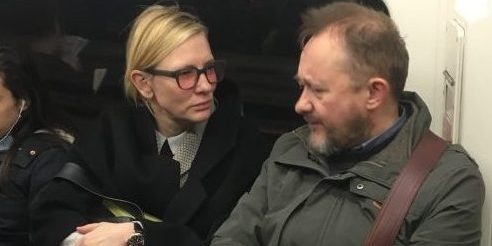 Actress Cate Blanchett is snapped by a commuter on the Tube 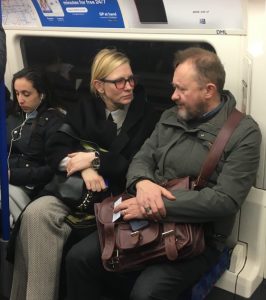 Cate on the Tube!

The actress was with husband Andrew Upton

You don’t have to be a professional paparazzi photographer! Some of the best photos appearing in the press and media come from the public! These days everyone who has a mobile phone can potentially take a great celebrity photo.

Featureworld loved this photo of Cate Blanchett deep in conversation during the morning commute in London! I was approached by the art student who took the picture and who is a great fan of the actress. He couldn’t believe his luck when he got on the Tube and saw her sat opposite.

Cate Blanchett is normally seen standing in the spotlight on a red carpet.

But the actress, 48, dressed down to blend in with passengers as she sat with her director husband Andrew Upton, 52, on a London Tube – and barely anyone noticed.
The eagle-eyed commuter who snapped her said: ‘She was so deep in conversation with her husband that she didn’t even see me take the photo.’
The art student got on the Tube at Mornington Crescent. He said: ‘I jumped on and couldn’t believe it when I looked up and saw Cate Blanchett. She is one of my favourite actresses. Although it was early in the morning, she looked amazing, so natural and even more stunning in the flesh. I thought everyone would recognise her but no one did.’
The Academy award winning actress met Andrew in 1996 on the set of a TV show and wed in December 1997. They have three sons, Dashiell, 17, Roman, 14 and Ignatius, nine, as well as adopted daughter Edith, two.
Their relationship came under the spotlight in January last year when Andrew spent a night out in Sydney with a group of friends including actress Love Child’s Harriet Dyer.
The smiling pair were seen with their arms around one another inside a bar and then holding hands before leaving the pub together to hail a taxi.
Following the outing Andrew said his relationship with 27-year-old Harriet was strictly platonic, describing her as ‘a good friend.’
A year later he only has eyes for his wife.
‘Cate was chatting animatedly to her husband,’ said the onlooker, who did not want to be named, ‘they were in their own bubble. They only had eyes for one another. It was actually lovely to see a couple chatting away and clearly in a world of their own. I couldn’t hear what they were discussing but it was obviously something of great interest as they didn’t look up once.’
It is not known where Cate and Andrew were headed. ‘The pair were still engrossed in conversation when I got off at Tottenham Court Road.’
The Mother of four looked trendy with her trademark streaked blonde hair tucked behind her ears. Wearing large black framed glasses she was wrapped up in multiple layers against the bitter cold in black mac, check wool trousers and jacket and chunky black sneakers. She clutched a black leather bag while her bearded husband sported pea green socks and a brown leather satchel.
The high profile couple, who are rarely seen together in public, recently celebrated their 20th wedding anniversary.  They split their time between their Los Angeles mansion, a countryside manor in East Sussex, England and a Sydney apartment in the historic Astor building.
Read the full story on Mail Online.
Do you have a celebrity photo to sell? Read more about selling a photo. Contact me for free advice >>
Category: Daily Mail Stories, Stories sold in 2018, Stories sold to newspapersBy Alison Smith-SquireFebruary 9, 2018
Share this post
Share with FacebookShare with TwitterShare with PinterestShare with LinkedInShare with WhatsApp