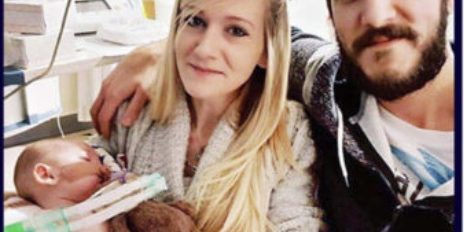 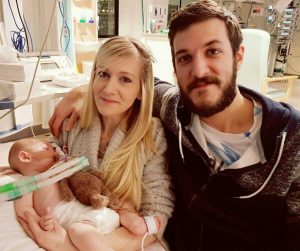 Connie and Chris with baby Charlie

But Great Ormond St hospital, which is to ask a judge to decide baby’s fate in a court hearing, claims in legal documents it is in the baby’s best interests to remove his life support and let him die ‘with dignity’

Heartbroken parents Connie and Chris contacted me for help about their baby son, Charlie who has been diagnosed with a rare type of mitochondrial disease and is currently on life support at London’s Great Ormond St Hospital. 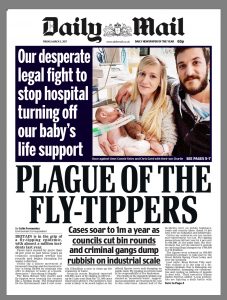 The family on the front page of the Daily Mail

Agonisingly they face a High Court battle to keep him alive – after the hospital issued legal proceedings to withdraw his life support.

Parents Connie, 31, a carer her partner, Chris, 32, a postman say they are devastated by the decision by Great Ormond St hospital to ask a judge for the right to withdraw ventilation from their seven month old son Charlie – intervention which will end their child’s life.

Their son, their first child, was born perfectly healthy in August last year but six weeks after he was born he became unwell. Tests showed he had a rare type of mitochondrial disease.

Doctors in the UK claimed there was little they could do. But the couple have since found an eminent neurologist in the US who has offered to treat their son, thought to be only the 16th person in the world to be diagnosed with the rare disease.

However, the ground breaking treatment, which has not been tried on many but is the couple’s only hope, will cost £1.2million.

The couple believed their son could be kept alive at Great Ormond St Hospital where he is on life support until they could raise enough money to get him to the US.

With that in mind the couple launched a GoFundme page to raise the cost of the treatment.

But doctors at Great Ormond feel it is no longer in Charlie’s best interests to keep him alive. A do not resuscitate order has already been placed on Charlie. And now doctors have gone one step further and have issued High Court proceedings to remove his essential life support.

Naturally Charlie’s parents are utterly heartbroken. They want to give Charlie every chance.

Charlie’s clinical team say they are simply acting in the child’s best interests.

I placed their heartbreaking and difficult dilemma with the Daily Mail and the story made the front page.

Charlie Gard Story: Read the story in the Daily Mail in full.

Donate to the couple’s GoFundme page.

Do you need help gaining publicity for your story? Contact me for free and confidential advice >>>