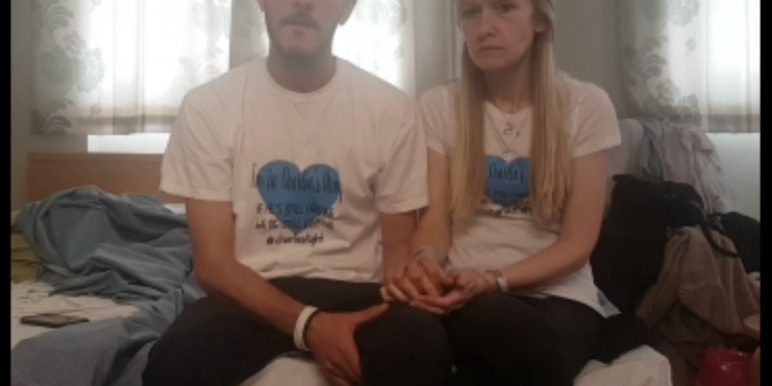 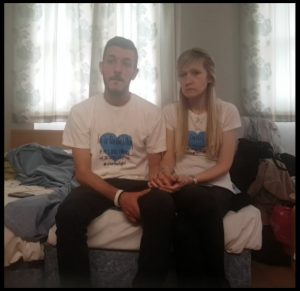 Parents sob in heartbreaking video about their plight

The heartbroken parents of terminally ill baby Charlie Gard say doctors are ‘heartless’ after being told they cannot take their son home to die.

Connie Yates and Chris Gard had battled to take their son, who has a rare genetic condition, to undergo experimental treatment in the US. But earlier this week they reached the very end of their legal battle after the European Court of Human Rights backed British doctors who said it would be kinder to let the ten month old die.

The couple have been told by doctors at Great Ormond St their son’s life support will be switched off tomorrow (Friday).

But they have been dealt a fresh blow after being told they cannot take Charlie home to die.

In a heartbreaking video taken in the room close to Great Ormond St where they have lived since their son was admitted to hospital, the couple sob as they speak for the first time since they were told the European Court verdict.

Father Chris, 32, said: ‘Our parental rights have been stripped away. We can’t even take our own son home to die. We’ve been denied that. Our final wish if it all went against us was to take our little boy home to die and we are not allowed.’

Connie, 31 from Bedfont, South West London, said: “We’ve been talking about what palliative care meant. One option was to let Charlie go home to die. We chose to take Charlie home to die. That is our last wish. We promised out little boy every single day that we would take him home.”

Chris added: “We want to give him a bath at home, sleep with him on the sofa, put him in the cot which he has never slept in, but we are now being denied that. They even said no to a hospice.”

The couple say they also offered to pay privately for their son to be transported on a mobile ventilator to their flat in Bedfond South West London in order to spend a few last precious hours with him.

The couple, who have previously lost battles in the High Court, Court of Appeal and Supreme Court, claim they also asked doctors to allow them a final weekend with Charlie but say this request has been denied.

“We begged them to give us the weekend,” she said, “Friends and family wanted to come and see Charlie for the last time. But now there isn’t even time for that. Doctors said they would not rush to turn off his ventilator but we are being rushed.

“Not only are we not allowed to take our son to an expert hospital to save his life, we also can’t choose how or when our son dies. The doctors are heartless.”

Charlie, who was born on August 4 last year – described by his parents as the ‘best day of their lives’-  is one of only 16 cases worldwide known to have a type of mitochondrial depletion condition. The condition saps energy from the organs and muscles leaving his lungs so weak he can only breath with a ventilator.

While he was born healthy, at eight weeks his mother noticed he was floppier than friend’s babies. After taking him to hospital, Charlie’s condition quickly deteriorated and he has been on a ventilator at Great Ormond St Hospital ever since.

Doctors told the couple there was nothing more they could do for Charlie, who they said had irreversible brain damage and could not see, hear or move. But his parents said they did not believe Charlie had the extensive brain damage doctors said as he could open his eyes and he knew is parents were there. They found an eminent doctor in the US willing to try nucleoside therapy raising £1.3million to pay for it.

Read the full story and watch the video on Mail Online.

Or see the video on Sun Online

Read more about Charlie Gard on my dedicated page.

Do you need to get a story out to the world? Contact me to find out how using the confidential form >>>