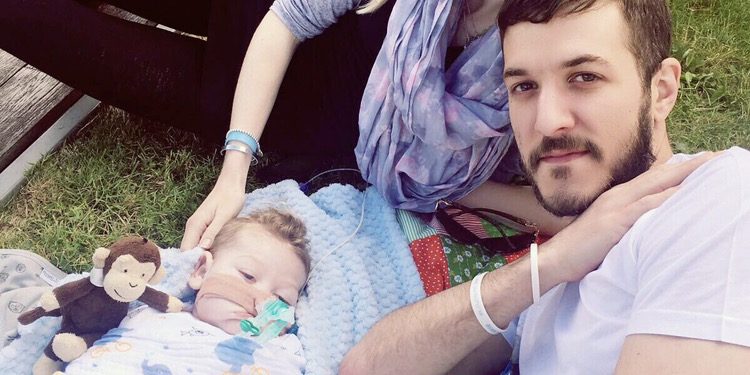 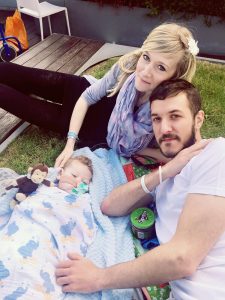 At first glance they could just be any couple enjoying the sunshine with their baby.

But this could be the first and final family picnic for the Chris Gard, Connie Yates and their terminally ill son Charlie.

Doctors treating the ten-month old have been ordered to keep him on life support while European Court judges in Strasbourg consider the case.

His devoted parents released the poignant photos of a picnic they enjoyed with their sick son over the weekend.

Connie said:  ‘Charlie was awake the whole time. It was wonderful for him to feel the sun on his face and the wind in his hair.

‘We put on some music and Chris and I lay down next to Charlie. For the first time in months we felt like a normal family.’

The picnic was arranged as a surprise by nurses at Great Ormond St Hospital.

Connie said: ‘The nurses who’ve cared for Charlie have been absolutely fantastic. We were so touched when they told us they’d arranged a surprise picnic for us.

‘They’d even bought food – drinks, sweets, muffins and nibbles. Then they left Chris and I alone with Charlie for over two hours. It was incredibly thoughtful and kind.’

The picnic took place on the rooftop gardens of the hospital in Bloomsbury.

Charlie suffers from a rare genetic mitochondrial syndrome which saps energy from his muscles and organs. Doctors at Great Ormond St claim he cannot see, hear, cry or move and he should be allowed to ‘die with dignity.’

However, Connie, 31, a carer, and Chris, 32, a postman, from Bedfont, west London, have fought to give him pioneering treatment in the US, which they say would not cause him any harm. Their plight prompted a flood of support from the public which in a fund raising appeal donated more than £1.3million for the nucleoside therapy.

Speaking for the first time since the couple lost their Supreme Court bid to overturn previous High Court ruling and subsequent appeal that life support should be removed, Connie said: ‘We feel terribly let down by the UK justice system. We are still shocked that the Supreme Court wouldn’t even hear our appeal.

‘The doctor in America says he believes there is no reason why the therapy won’t work for Charlie.  Any parent battle on as we have.  We can’t give up knowing there is a treatment available which could save his life.’

The couple are now pinning their hopes on The European Court of Human Rights in Strasbourg hearing their case.

They have until midnight on Tuesday. If the European Court cannot help then their son’s life support can be switched off.

Read the full story on the Daily Mail website.

It also appeared on subsequent media – including the BBC, ITV, The Sun and Daily Mirror and The Metro.

Find out more about Charlie Gard’s family’s journey to save their son here and by going to their website Charliesfight.org