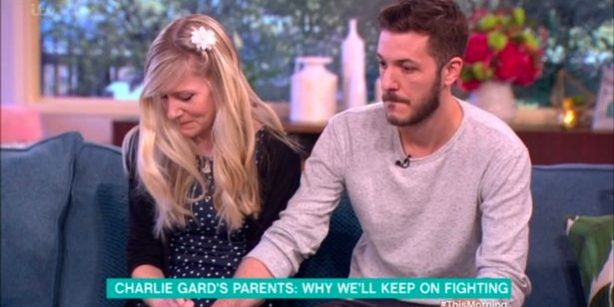 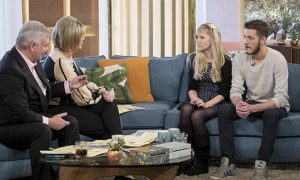 Connie and Chris on This Morning for a second time

Following my emotional interview with Charlie Gard’s mother Connie in the Daily Mail, I arranged for her and partner Chris to appear on ITV This Morning.

This was the couple’s second appearance – they went on a few weeks ago when they spoke about raising the £1.2million for treatment for their son in the US.

The devoted parents have been fighting to get son Charlie, who suffers from a rare mitochondrial condition, ground breaking treatment to save his life. However doctors at Great Ormond St hospital, where Charlie is currently on life support, believe it is in Charlie’s best interests for him not to have the treatment and want to switch off his life support so he can die ‘with dignity.’

Since the couple last went on This Morning, there has been a High Court hearing where a judge ruled UK doctors should be allowed to switch off Charlie’s life support. They now have up to three weeks to consider an appeal.

Connie broke down as she told presenters Eamon Holmes and Ruth Langsford how devastated she and Chris both are.

Chris explained he felt doctors are making out Charlie’s brain damage is a lot more severe than it is and they still believe Charlie should have the chance offered by a US doctor.

As Connie said to me when I spoke to her on behalf of the Daily Mail, the thought of turning off Charlie’s life support is unthinkable when he is so stable on the life support.

While some believe the questions the couple were asked were necessary, the interview has since attracted some criticism with some claiming Charlie’s parents were shown no real sympathy or empathy.

You can read more about Charlie’s story here.