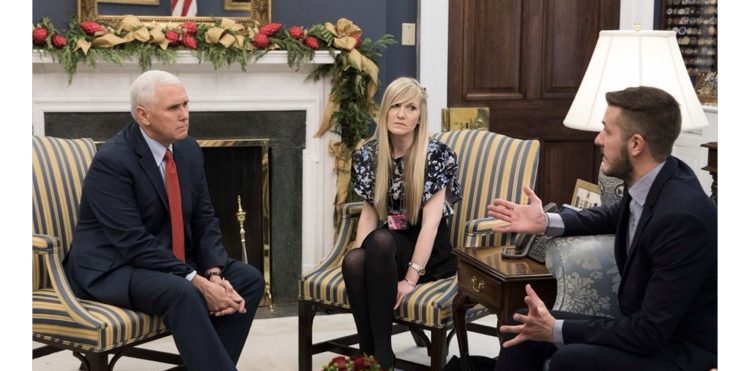 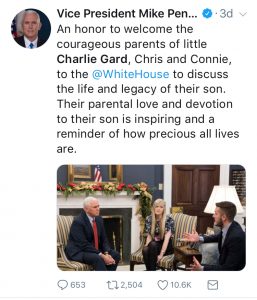 Chris and Connie at the White House

Connie Yates and Chris Gard, whose son Charlie was removed from life support despite their wishes, were warmly welcomed to the White House recently.

The couple who came to Featureworld in a desperate bid to raise funds for treatment for Charlie in the US, met with Vice President Mike Pence.

Pence, along with President Trump,  and Pope Francis all publicly expressed their support for baby Charlie. Connie and Chris fought a long court battle for him to be released from care at Great Ormond St Hospital and be allowed to have experimental treatment offered by American Specialist Dr Michio Hirano.

Pence said it was ‘An honor to welcome the courageous parents of little Charlie Gard, Chris and Connie to the White House to discuss the life and legacy of their son.’

In a tweet accompanying a photo of Chris and Connie, he added: ‘Their parental love and devotion to their son is inspiring and a reminder of how precious all lives are.’

When Charlie was alive Pence said Parents ‘should be able to choose the greatest extent of life-saving treatment that’s available to their child.’

On July 24th 2017 Chris and Connie ended their legal battle after Dr Hirano advised them his muscles had deteriorated too much for treatment to work. The couple were devastated as they believe had Charlie been allowed the treatment sooner he could have ‘had the potential to be a normal healthy little boy.’

Four days later his ventilator was removed and he passed away in a hospice.

Of the visit to the White House Connie told me: ‘A lot of people from all backgrounds helped us during Charlie’s struggle.

‘It was good to be able to thank Mike Pence in person for the White House’s intervention which gave us more time with our son, even if they couldn’t save his life.’

She and Chris are currently putting the final touches to The Charlie Gard Foundation, which will be launched as a charity early in 2018.

Read more about the Charlie Gard story and how Featureworld helped.