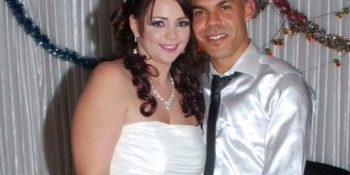 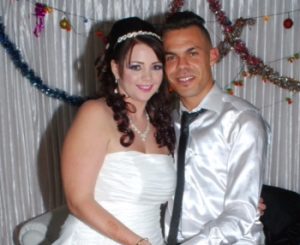 Sarah and Haithem on their wedding day…

Sarah Phillips and Haithem married in a white Tunisian wedding

When Sarah Phillips 33, a mum of one, met Haithem on holiday in Tunisia she thought she’d found the love of her life.

Within three months, despite friends and family telling her not to rush into things, the couple had wed in a white wedding in Tunisia.

The wedding was particularly poignant for Sarah. Aged 18 she almost died after taking half an ecstasy tablet on a night out. She underwent an emergency liver transplant which saved her life but since then has been plagued with health problems.

Sarah saved £2500 from her job as a delivery driver to pay for Haithem’s visa to the UK. She took out thousands in loans to pay for their wedding and flights. 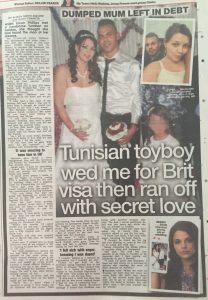 Sarah in The Sun

Because the couple were married and Haithem officially became Sarah’s carer, a visa to the UK was quickly granted by the Home Office.

But in March 2016, and now back in the UK, Haithem got angry when Sarah suggested he should get a job. Reluctantly he got a job as a labourer. Five weeks after arriving, he kissed Sarah as if he were going to work one morning – and never came back.

Furious Sarah, who lives in Kent, has since discovered via Facebook that he has gone off with another woman in Scotland – whom he met several years ago when she was on holiday in Tunisia from the UK.

The Home Office has since curtailed his visa meaning he has to go home or reapply for residency in the UK.

Sarah has now employed a Tunisian lawyer to divorce Haithem but is devastated and feels such a fool for being taken in.

Haithem told me he struggled when he came to the UK and regrets what happened.

Read Sarah’s story in The Sun newspaper. And a follow up to this story will shortly be appearing in a top women’s magazine!

Cheating story to sell? Expose your love cheat in a newspaper or magazine. Find out how by filling in the form to the right of this page >>>