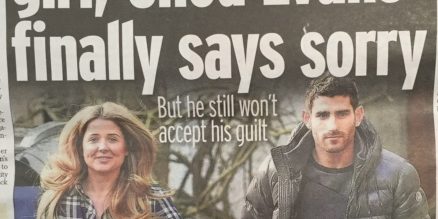 Former footballer Ched Evans has finally apologised for his actions.

But is it too little too late? And would things have been different if Ched Evans had spoken out earlier? 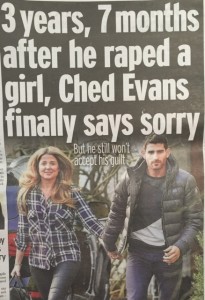 Ched Evans isn’t the first person who hopes bad publicity will blow over if they bury their heads in the sand and make ‘no comment.’

But the former Sheffield United striker, who was convicted of raping a 19-year-old,  is finding out the hard way that not speaking out is rarely the best way of handling a press crisis.

Whether Ched Evans, who has continued to protest his innocence and is waiting for the Criminal Cases Review Commission to decide whether his case should be reopened, has been victim to poor advice over handling the media or simply decided himself not to say anything we don’t know.

But following the furore that has followed him as he’s tried to resume his football career, he now says: “I wholeheartedly apologise for the effects that night has had.” And he admits, “My silence has been misinterpreted as arrogance.”

Apparently he was told to stay silent silent due to legal advice. So perhaps it was some arrogant over-paid lawyer who mistakenly told him not to say anything at all.

Because I can’t believe any experienced publicist or press officer would have advised this man, given his situation, not to respond.

In fact people often – mistakenly in my opinion – believe that ignoring a media scrum will help it go away.

Sometimes if you don’t want to speak to the press, lying low until everyone goes away is the best way. But that only works if you are someone the press wants to talk to –  not if like Ched Evans you are the story.

If you are at the centre, indeed the very subject, of such a big story as this – where petitions are being organised about you with the signatures of thousands of people on them and national newspapers are writing stories about you every day – then I am afraid you must respond.

At the very least you need to put out a proper, heartfelt statement – if only to protest as Ched Evans claims, your innocence.

Given the sort of outrage and venom the Ched Evans case has caused, it is a great shame that he did not do so earlier.

As Ched Evans has discovered, it didn’t mean admitting his guilt – if as he says he still believes he is innocent and there has been a miscarriage of justice – but it does mean showing some sort of responsibility for what’s happened.

It does mean showing yourself as a responsible individual. It means confronting the issue yourself, showing you are acting on it and doing so in an unselfish way.  You should not use ‘friends’ to speak for you either and ideally not your lawyer or anyone else. People should hear your voice.

But whatever you do, you do not stay silent or say no comment.

Doing a short, legally controlled interview with a newspaper or on television can go a long way to ensuring people see you in a different light. Why Ched Evans didn’t, when this story first erupted, state his case personally – that he believes he is the victim of a miscarriage of justice, that he believes he has done his time and should be allowed to go back to his job, I have no idea.

But whoever advised this young man to stay silent has made a massive error. Because unfortunately silence has compounded this miserable story. And any statements made now are likely to be far too little and definitely too late.