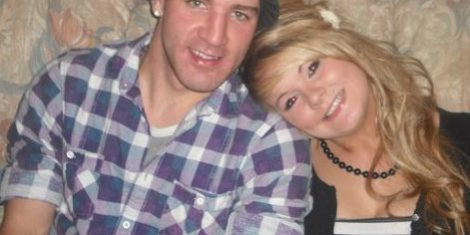 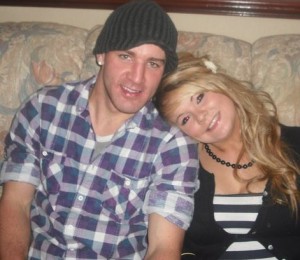 Most people don’t ever have to cope with a family of four – let alone when they are just 21. So having already had son Osian, two, Christie Fletcher was amazed when she got pregnant with triplets!

Even more astonishing was that Christie was on the pill when she got pregnant – so it was an incredible shock. However, she adores being a mum!

Christie came to Featureworld to sell a story to a magazine, and her story appeared on the cover of Take a Break magazine!

Sell my story to a magazine!

You can read it here…

I had one baby … then out came TRIPLETS!

Christie Fletcher, 21, planned on having one brother or sister for her son, Osian, two in a few years time. But some things in life can’t be planned…

My friend handed me a cup of coffee and sat down.

“Guess what!” she said excitedly.

“You’ve won the lottery…” I offered, “met a millionaire…”

Although I was happy for her, getting pregnant right now was the last thing on my mind.

When I met my partner Carwyn Jones, 26, having kids were something I’d never thought of.

Life has a way of springing surprises though. And it certainly was a big shock when we discovered I was pregnant with our son Osian, one. 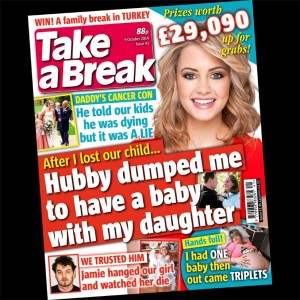 After all I’d been on the pill when he was conceived.

Once we got over the shock, Carwyn and I were thrilled.

A few days later I was sat with Osian and Carwyn having lunch.

I nodded and the sick feeling passed as soon as it came.

But the next day I felt the same. Surely I couldn’t be pregnant again?

I checked my pill packet. After Osian I’d been religious at taking my pills but I’d taken all as I should have done.

When Carwyn came in from work I told him.

“But we’ve hardly had time for sex!” he joked.

Agreed. Carwyn had worked overtime, we’d had loads of sleepless nights with Osian. I could only pinpoint two times when we’d had time for a romp. I hadn’t even missed a period yet.

Yet… I definitely felt pregnant. And it seemed as if Carwyn and I were super fertile.  We only had to look at one another and I was pregnant. I’d never understood how I’d managed to fall pregnant the first time.

The next day I got a test. Positive! I almost collapsed in disbelief.

Carwyn was more optimistic. “Well it will be lovely for Osian to have a little brother or sister won’t it, “ he said.

And my friend was delighted. “We’re gonna be pregnant together,” she cooed.

Then she added, “and you’ve already got a bump…!”

I looked at my rounded tummy.

I groaned. For around six weeks pregnant it was certainly quite big. I only hoped I wasn’t going to be unlucky and get hugely fat…

But all hopes of a neat little bump quickly went out of the window.

A week later I was shopping with my friend for maternity clothes. Only, as I held a billowing dress up against my rapidly growing tummy, I couldn’t help but worry. I already seemed huge. If I carried on growing at this rate there was no way I’d fit into any maternity gear at nine months.

I shook my head. There was no history of twins in either mine or Carwyn’s families.

As the weeks went on I began to worry. Was it normal to look six months gone at two months?

Perhaps all wasn’t well with the baby… maybe I was further on than I thought. I hoped it was the latter.

By the time my routine scan came at 12 weeks I was waddling.

As I laid on the bed to have my scan, I clutched Carwyn’s hand. I felt inexplicably nervous.

The sonographer turned the screen towards her and began clicking her computer screen.

A tingle of nerves twinged in my stomach. I didn’t remember my scans taking this long.

Only the sonographer was smiling.

She called over to another woman who was sat at the side of the room.

They swapped chairs and then the second woman swivelled the screen so I could see.

I gulped. Twins! Carwyn shot me a look of shock.

“And there’s another head just here,” said the sonographer.

“You’re having three babies,” she said.

My life flashed before my eyes. My tiny two bed flat. Osian. I was only 21 and I was going to be a mum of four. How would I cope.

Any moment you will wake up from this dream… I told myself.

But it was real. Luckily Carwyn was smiling though. “That’s amazing…” was all he could say as he stared at the three little heads on the screen.

There was more news.

The babies all had their own placentas.

While a woman only usually produces one egg a month, I’d produced three eggs. And each one had been fertilised by an individual sperm.

“Usually with triplets one is twins and the other is a single baby. To have three non identical triplets without fertility treatment is very rare.”

Everyone was thrilled for me.

My friend was impressed. “Wow, that’s why you’re so big,” she said, “Congratulations!”

Only my mind was in a whirl.  I was lucky. My mum only lived down the road. And although Carwyn didn’t live with me, he was a real hands-on dad.

Yet, the thought of three babies with three cots, three sets of clothes and three mouths to feed.

The months went by and my tummy got so big I thought I would pop.

At five months a scan showed I was having three boys.

“Typical!” I said to Carwyn envisaging even more chaos in my small flat with all that testosterone.

Then at 24 weeks I began having pains. Carwyn took me to hospital.

“Your cervix is stretched,” said the doctor. He explained there was a worry of premature labour. If they were born now they might be too small to survive.

I would have to stay in on bed rest for the rest of the pregnancy. I went full term with Osian and the thought of three months lying in bed loomed in front of me…

My face must have dropped because the doctor added the triplets were unlikely to remain inside me for much longer, “but every week they’re in increases their chances of survival by five per cent.”

The next three weeks were worrying. Doctors were concerned about blood clots so I had scans and injections every day.

But finally at 33 weeks doctors decided the babies should be born by C-section.

Hearing them cry was wonderful. As they were early they were whisked off to special care. But although they all needed feeding tubes, only George needed help with breathing.

As I was wheeled down to see them in the nursery a nurse said to me: “Everyone wants to see your beautiful triplets.” I felt a surge of pride.

I hadn’t want to sort any nursery at home – just in case something happened to them.

But family and friends were fantastic. By the time we came home to New Road, Glyn Ceirog, Wales, three weeks later three cots and three sets of clothes were already there.

I even managed to breastfeed for the first month.

The boys are now a real handful. Seeing Osian with his brothers is amazing and I adore being a young mum.

I’ve since discovered the chance of having non-identical triplets is 25,000 to one. Sometimes I have to pinch myself because I feel so lucky to have them. Life is hectic but I wouldn’t have it any other way.”

Have you had twins, triplets, quads or more? I am always looking for lovely stories about multiple births. Contact me using the form to the right of this page >>>  to see if you have a story to sell.

Category: Stories sold in 2014, Stories sold to a magazine, Take a Break storiesBy Alison Smith-SquireNovember 18, 2014
Tags: Twins triplets quads and more stories
Share this post
Share with FacebookShare with TwitterShare with PinterestShare with LinkedInShare with WhatsApp