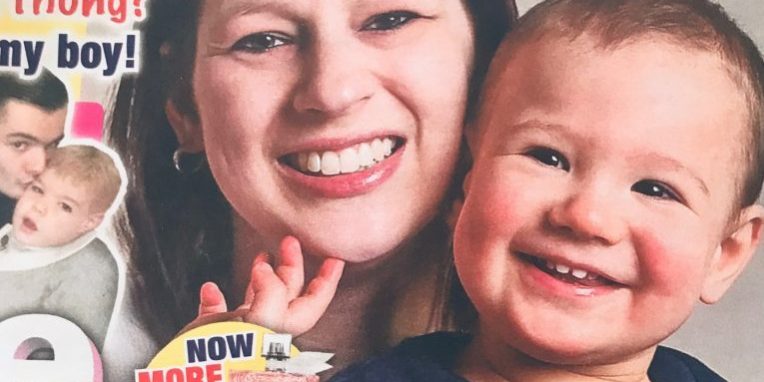 Mum to be and unborn son survive devastating coma 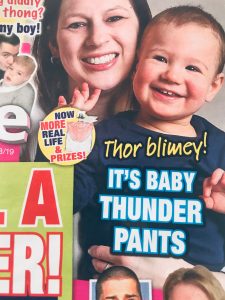 Emma and her son on the front cover!

Emma Hawkins was just 24 weeks pregnant when she collapsed at work and fell into a coma. Devastatingly, she’d suffered a massive brain haemorrhage. Her husband was warned to expect the worst and feared he could lose Emma and their baby son.

But incredibly Emma and son Joshua-Hay defied all the odds to survive. At 37 weeks the little boy was safely delivered by C section and is now a lively little boy. Emma is back to work.

The family decided to tell their story to inspire anyone else going through a medical nightmare. I placed the family’s extraordinary story in the Daily Mail newspaper

I am delighted to announce it has now appeared over two pages of national women’s weekly mag, Real People. Even better, Emma and Joshua-Jay appear on the front cover!

Read their amazing story below. Meanwhile if you have an amazing story for a magazine or newspaper why not contact me? As well as earning a payment for your story, you will be helping others…

HOW MUM AND UNBORN CHILD SURVIVED A COMA

Emma Hawkins, 32, from Derby thought her funny turns were just caused by pregnancy. Then she collapsed…

“Slumping down on the sofa next to my husband Jay, 37, I patted my pregnant tummy.

“So good to sit down!” I sighed. At five months pregnant with our first baby and working full time, I hadn’t just felt tired the past few weeks, I was shattered… 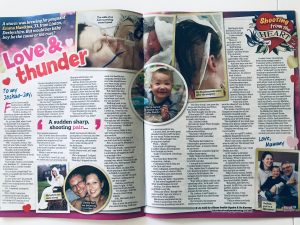 “Let me get you a cup of tea,” said Jay standing up. I sat back and smiled. Being pregnant certainly had its bonuses…

A few minutes later Jay arrived back with my cuppa. I reached out for it.

Jay rushed over. “You fell off the sofa,” he said helping me up off the floor.

“Did I?’ I felt confused. “this pregnancy is affecting my brain!”

The next day I mentioned the fall to my midwife.

“It isn’t the first time I’ve felt unwell,” I told her. Apart from some morning sickness the pregnancy had been a dream. But the last few weeks I’d had repeated headaches. I’d mentioned them before to my GP and the midwife – but every time I was reassured I was fine.

She checked my pulse and took my blood pressure. “Well, all seems well,” she said, “I think we can just put it down to something harmless happening in pregnancy.”

A few weeks later I was at work when all of a sudden I was overcome with a terrible headache.

“Are you Ok?” asked a colleague as I got up out of my chair to go the loo.

But barely had I stood up when my legs buckled. The pain in my head was tremendous. Unbearable. As if a thunderclap had gone off.

As I collapsed on the floor I vaguely heard my colleague asking others to call for an ambulance.

I heard the sirens but I couldn’t speak. But lapsing in and out of consciousness I knew something terrible had happened to me.

The next I knew I was in a strange bed.

Jay was at my side. His face looked red as if he’d been crying.

Instinctively I immediately felt my bump. I was still there. I remembered collapsing. I was in hospital.

“Is the baby Ok”, I whispered.

I rolled over to go back to sleep. I was too tired to hold a conversation.

My legs felt heavy, I could barely move my arms.

Over the next few weeks I gradually learned what had happened.

I’d had a catastrophic brain haemorrhage.

No one knew why it had happened.

But Jay said: “We almost lost you.”

The first thing Jay knew about me collapsing was when he got a call from work. As soon as he got to hospital he was ushered into a side room. I was already fighting for my life.

“Doctors told me to expect the worst,” he said. It turned out the bleed at the back of my brain was so huge no one expected me to live. And as our unborn baby was so tiny his chances of survival were bleak. Doctors expected me to die within a few hours. Meanwhile our much wanted baby was given only a 30 per cent chance.

Fortunately an amazing surgeon spent over 11 hours operating on my brain to stem the bleeding.

Afterwards I was put in an induced coma to recover.

Over the next few weeks – determined to get out of hospital – I spent hours relearning to walk, talk and feed myself.

I had another operation to insert a shunt into my head. And I spent hours stroking my baby bump.

‘You’re keeping me going…” I told my unborn son.

Eventually when I was 37 weeks pregnant a consultant said: “Mrs Hawkins we are going to deliver your baby by C section.”

I’d hoped for a natural delivery without painkillers. Now the consultant was saying, “it will have to be a general anaesthetic.” I had no choice. Otherwise the pressure in my head could increase. I could have another brain haemorrhage with fatal results.

“Are you disappointed?” asked Jay. I shook my head. I was grateful to be alive – and desperate to meet our new baby.

At 37 weeks the day arrived. Jay was gowned up so he could hold our baby straightaway. He would be delivered into his daddy’s arms.

When finally I came round I was a mum! As soon as I saw him in Jay’s arms I fell in love. He was so beautiful! Joshua Jay weighed a healthy 6Ib 11oz. As Jay carefully placed our baby son in my arms I felt tears well up. Tears of happiness.

A month later both of us came home from hospital. As I walked through the front door, I felt overcome with emotion. I felt so lucky – not only to have such a beautiful healthy baby but to be alive.

Tests revealed I might have been born with a ‘birthmark’ weakness at the back of my brain. It was a ticking time-bomb, said doctors. It could have burst at any time.

Ironically being pregnant might have saved my life as pregnancy might have triggered it. But if it hadn’t burst when it did, it might have got bigger. If it had grown any larger the bleed would have been worse.

At first it was hard recovering and looking after a newborn baby.  But looking after Joshua Jay made me run around and sped up my recovery. Although I am now back at work I’ve been left with some mobility problems and speech problems. But it’s a small price to pay for being alive. And every time I look at Joshua Jay I just feel so lucky to be alive – and so lucky to be a mum.”

Jay says: “To be told your wife is about to die was a terrible experience and to be told you are also likely to lose your baby too was the ultimate nightmare.

‘So to see both of them so happy and well feels nothing short of a miracle to me.

I’ll never forget the moment Emma came round from the coma. I knew when she asked how the baby was we were going to be fine.

But nothing prepared me for the emotion I felt when a nurse carried Joshua Jay out of the operating theatre and laid him in my arms.

“I believe Joshua Jay might have saved Emma’s life. Emma could have gone on for years with odd symptoms such as vertigo and the subsequent bleed could have been even larger and certainly fatal. I can’t bear to think how I would have coped without her.

‘Thankfully it was survivable. We I just can’t thank the NHS and the consultant for everything they did. I still look at Emma and Joshua Jay and think without the skill of the doctors I might have lost my whole family.”

Find out more: Selling a story