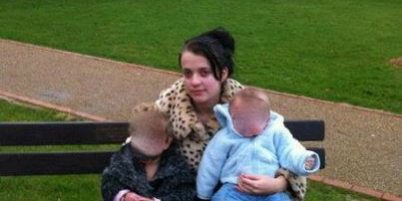 For weeks Gemma Dalchin felt inexplicably tired and suffered from headaches. Her daughter aged 18 months changed from being a bubbly girl who had lots of energy to someone who simply wanted to lie around and had no energy. 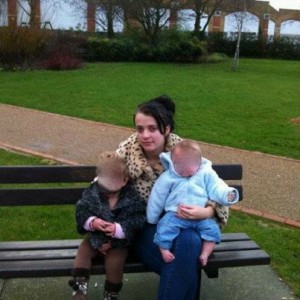 Gemma visited her GP and even her local hospital numerous times – but doctors simply told her she and her children were suffering from a virus.

However, on New Year’s Eve Gemma tuned into an episode of Coronation St. In that episode single mum Fiz, played by Jennie McAlpine, 28, had been poisoned because secret lover Tyrone played by Alan Halsall, 30, had failed to properly fix her boiler.

In the episode Fiz collapsed because of carbon monoxide poisoning. This is a gas given off by faulty boilers that can kill – but because it has no smell, people do not realise they are being poisoned.

However, Gemma recognised she and her children had been suffering from similar symptoms to Fiz and at the end of the programme went on the helpline website given. 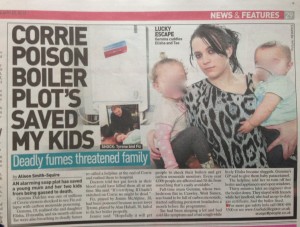 The helpline immediately sent out an engineer, who confirmed her flat was full of carbon monoxide and shut the boiler down. Gemma opened all the windows and the following day she and her the children went straight to hospital. It was there doctors discovered the level of carbon monoxide in her blood was so high she could have died within hours.

Gemma’s boiler has since been fixed and like Fiz, she has moved back into her flat. She now has a £15 carbon monoxide monitor. She says: “I am just so grateful to Coronation St for saving mine and my children’s lives.”

For more info about carbon monoxide poisoning go to www.gassaferegister.co.uk

Is your life like a soap? If you have story to sell linked to a soap such as Coronation St or Eastenders then contact us using the form to the right.