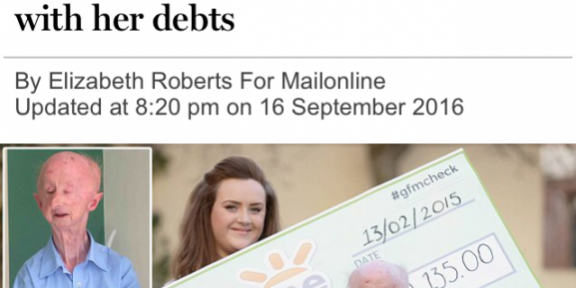 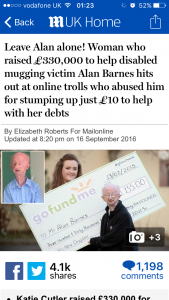 Katie Cutler was the selfless woman who raised thousands of pounds to help Alan Barnes, who was attacked at home, to help him.

A row has now broken out over the fact Ms Cutler is being chased by a PR firm she hired to help her gain publicity over money they claim she owes them. Meanwhile Mr Barnes, who bought a house with the money Ms Cutler raised for him, has reportedly given her just £10 to help pay off debts she incurred engaging the PR company.

Putting aside whether Mr Barnes should help her pay off her debts – trolls have caused uproar after saying he should do – the issue here is how much PR costs.

It is reported that Claire Barber PR has gone to the small claims court to chase Ms Cutler for some £7,000 after they helped the couple gain ‘blanket publicity.’

Firstly the sort of publicity this PR company obtained is pretty typical of the sort of press and PR I gain people coming to Featureworld for FREE. No one pays a penny coming through Featureworld because I am paid for writing the story for papers and mags. TV also pay me a fee for sending interviewees to them. I manage to make my living by invoicing the publications and TV – not my interviewees.

So far from asking for fees from interviewees, I actually gain them deals from the publication/TV where they appear – so individuals using Featureworld  are also paid.

Reportedly Ms Cutler was charged £550 a day by the public relations firm to raise their profile. Now as she cannot pay the bill she is being threatened by bailiffs.

However had Ms Cutler come to Featureworld to gain the publicity then I would have been able to gain her the same amount and it would have cost her nothing at all!

Similar recent publicity in multiple mainstream papers, national TV and publications worldwide was recently gained for Georgina for example who came to me after she was raped.

That said while Georgina was someone who realised the hard work that went into her story, I do find many interviewees have little idea of how difficult and time consuming gaining press and publicity is.

Marketing a story, presenting it to editors so it is something they want to buy, ensuring people are happy with the way they are presented, checking up on legal issues and in my case, negotiating a deal for them demands vast expertise, time and experience.

That person is also getting access to editors and contacts that have been built up over years – this is why it is virtually impossible for people to sell their story directly to a publication. They might believe by doing that they are cutting out the agent and therefore making more money for themselves but the reality is they are opening themselves up to losing money and being exploited.

Indeed, every story requires many emails and phone calls to organise the sort of publicity where someone is successfully featured in multiple newspapers, magazines, websites and on television.

And while some people say Claire Barber should have worked for free, a lot of a PR company’s work is often spent helping charities and those in need – it simply would not be possible for anyone to spend hours and weeks working for free and indeed building up costs in terms of phone and travel bills simply because they want to help.

Of her dealings with Ms Cutler, Claire Barber of Claire Barber PR told Mail Online: “We worked together for four months achieving blanket bespoke PR coverage across almost every national newspaper, multiple TV news channels across the North East and UK including Sky, ITN, ITV, the BBC and Channel 4, Radio 2 and an exclusive negotiated interview on ITV This Morning that took a considerable amount of time to set up. Also hundreds of emails, calls and planning. It was an enormous amount of work with phenomenal success.”

However at the same time I do believe for many individuals employing a PR company where they pay for someone to promote them is fraught with difficulties. For example a PR might put in a lot of work and just not be able to gain publicity – or if they do gain publicity it might not be as much as the person hopes. Or that publicity might not translate into sales or more earnings.

It is also sad how very many people end up spending thousands on PR companies and get poor results. I regularly have people come to me saying they have spent thousands with a PR company and got no publicity at all – or very little.  As a journalist who receives hundreds of PR puffs from these companies every day in the hope I can get the story into the media, I can say that many PRs are absolutely useless. They have no idea how to sell a story and they are wasting their client’s money. In this case for example the interviewee told me she had spent a lot of money on PR with no results at all. She then came to me, I put her story in the Daily Mail for a fee to HER and overnight her profits doubled.

Hopefully the bill for the PR firm will be settled – maybe again through donations. Whatever it has hopefully given the public an insight into the reality of how much hard work goes into every story that they read.