Mum of two Marina Chapman is married to a Church organist and lives in Bradford. Nothing particularly unusual there, of course, except she has written a book claiming for five years she was brought up by monkeys. So is her story true? We look at the facts… 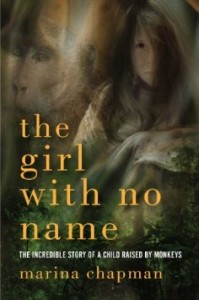 Marina Chapman and her publishers Mainstream Publishing must be delighted with not only a huge three pages recently devoted to her story in the Mail on Sunday but also another double page in The Sun newspaper and The Telegraph. The internet is also full of the story…

And it seems as if part of the appeal for newspapers when considering whether or not to print this story was the fact that, frankly, no-one knows for sure if it is true.

In fact, when the story appeared on the Daily Mail website – challenging readers to look at their extract from the book and judge for themselves whether or not it was true – it had hundreds of comments on it. Most seemed to think it was an April Fool joke…

In her book, The Girl with no Name: The Incredible True story of the girl raised by Monkeys, Marina tells how at the age of four she was kidnapped from her Columbian home by child traffickers. She was then dumped in the Catatumbo Forest where she was raised by capuchin monkeys (luckily not some other breeds which probably would have attacked her…)

She claims she was later found by hunters and sold to a brothel as a maid but then escaped. Incredibly, she was then saved by neighbours who took her to West Yorkshire in 1977. Since then she’s led a conventional life.

From the extracts her writing is simple but includes detailed description  – and it does seem unbelievable that she can remember in so much detail at the age of four or five being kidnapped and then found by monkeys.

After all, most of us asked to recall events that happened when we are so young, would surely be hard pressed to remember anything much, let alone a book’s worth.

It is also difficult to comprehend how such a young child would survive in the wilds of a jungle. However nice the monkeys were, grooming her and sharing their food, such a small child does need a lot of parenting to remain healthy. Such a small child also needs to learn speech and how to keep clean if they are to survive, probably why human parents are programmed to stick around their offspring for years.

However, according to Ben Jackson, the Sun’s environmental editor, Marina ‘moves, talks, acts and even eats in a way that is unconventional – and yes, a little monkey-like.’

He adds that although her memories are jumbled, they are backed up by Columbian villagers. And so her story has been taken seriously by experts. So seriously in fact that the National Geographic channel is now planning a documentary in which they will return to the jungles of Columbia with Marina.

Certainly – with photos sent out by the publisher’s PR company of Marina, now a grandmother, clinging onto a tree and crouching in a tree hollow – it makes a very unusual and entertaining tale. And although we don’t know if the publishers have marketed it to the public as ‘unbelievable? well, read it for yourself and decide…’ , if they did, it’s been a very clever PR ploy, which has worked a treat…

The Girl with No Name: The Incredible Story of a Child raised by Monkeys is available from Amazon.