Journalism – and the basic reporting of news – has always relied on the public. But these days with the internet, there are more opportunities than ever before for the general public to sell a story to the press. 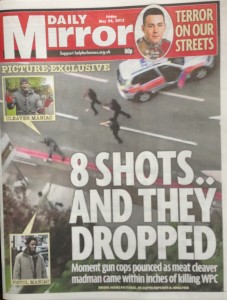 The Mirror uses exclusive footage on its front page…

The horrific murder of soldier Drummer Lee Rigby in a London St in broad daylight is a classic example where film footage and accounts from witnesses have helped create some of the most dramatic news stories in our national newspapers – and indeed vital evidence.

Within hours of the killing, various videos emerged that were taken by people who witnessed the horror – and it has appeared in all the national newspapers and on many TV bulletins.

And this is far from the only example. Every day – and more and more – the press relies on the ordinary person who catches something extraordinary on their camera.

Thankfully, most of us will never witness shocking events as we go about our daily lives. But due to the advent of the mobile phone – which doubles as both camera and camcorder  – should you find yourself in the middle of a breaking story, it is straightforward to become a reporter yourself.

Here’s some points to remember:

* If you want to sell footage on a breaking news story you need to act quickly. These days news goes in and out of the papers so fast that even a delay of a day can devalue your film or photo. However, the value of footage you have taken isn’t always instantly obvious. For example, some people did not realise they had got footage of the Boston Marathon bombers walking away from the scene until photos of the wanted men began appearing and they sifted through their footage. Film like this can of course be sold days – or sometimes weeks, months or even years after an event – if it shows something new that hasn’t been seen before.

* You don’t need to be the only one who took any film for it to be saleable. It might be at the time other citizen journalists also took films too. Often national publications or broadcasters will use a variety of different films to give the best overall picture. Or different people’s films can be sold to different papers. However, if several films are available, yours will often have to show something different or be better than others to be sold.

* It might sound obvious but if you have got some exclusive shots on your phone of a breaking story, don’t upload it to YouTube, Facebook or tweet it. If you do, you will be making your film public and instantly make it unsaleable.

* People often ring or email Featureworld and ask how much their footage or photo is worth, expecting us to give them a price when we haven’t even seen it. Remember there is no price list for how much stories are worth! Rather it is worth what an editor will pay for it and what you will accept. If more than one editor wants it, it is clearly sought after and worth more. And if you hold out for some unreasonably high amount, then you won’t sell it.

* To know how much to pay you, editors have to see the footage or film. Some people imagine they can sell a film or photo without actually showing it first to anyone – probably because they wrongly believe someone can ‘run off’ with it. But editors will have to see your film or photo to know if they want it or not. There’s no point in them paying lots of money for something that is blurry or actually doesn’t show anything new or interesting at all.

* In the UK film footage or photos you have taken automatically belong and are copyrighted to you. Be sure when you are selling that footage or photo, exactly what you are selling.  Can that newspaper, Television channel or website run your film over and over? What about in years to come – can they use it again? Will it suddenly appear in a documentary without your consent? Be sure in the rush to sell your footage that you understand exactly how it will be used – is the price you are getting for one use only or have you unintentionally signed over all rights to it giving that organisation carte-blanche to sell it on and make money out of it themselves? At Featureworld, we will be able to swiftly sort out a contract and also send your story to various editors to gain the best price.

* Although you might have a story to tell about what you saw, often footage or photos can be sold on anonymously – no-one, apart from the company you are selling it to, needs to know it came from you.

* It goes without saying, no footage, however brilliant, is worth risking your life for – or anyone else’s life for. But the importance of great photos and films cannot be underestimated. And not just for the press. Photographers and camera crews are sometimes criticised for ‘just standing there and taking the footage when they could have done something’ but without such revealing films, much would not be understood about humanity in general. Footage can also become evidence in future trials.

If you have taken film footage a photo and would like expert advice on how to sell it, contact us in confidence using the form to the right of this page>>