Undoubtedly at the age of just 33, Courtney Adamo has a life many would envy. A mum of four stunning children – she has two sons aged nine and seven followed by two daughters aged five and 19 months – she is married to an equally very attractive man. And they live in a sprawling period house in trendy and uber expensive North London. 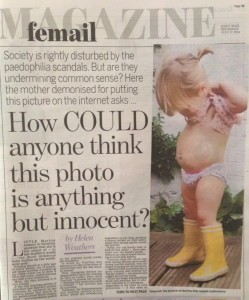 Courtney Adamo has her say in the Daily Mail…

On top of that she is extremely slim, is clearly a gifted photographer and runs an online boutique selling bespoke children’s clothes. She is also the creator of a beautiful Instagram account where she gives an extraordinary peak into her world.

Perfect photos of an idyllic family life – her children playing on the beach, baking, having friends for tea are interwoven with little glimpses of the stylish interior of her home and little loving snapshots of her and her husband.

She says she started putting photos on Instagram so relatives can catch up with the family but admits it has been good for business. And certainly her online boutique is selling a lifestyle, for which her Instagram account is the ideal showcase.

However, her life took a nightmarish turn after she posted an innocent photo of her youngest daughter baring her tummy on the site. Someone made a complaint that the photo was somehow indecent, which resulted in Instagram taking her whole account down.

After she blogged about her shock that anyone could find the innocent picture indecent  – and further disbelief that Instagram could agree (especially considering some of the photos they do allow) her story hit the headlines.

Because of this publicity, Instagram reinstated her account. And now she appears in the lead story in the Daily Mail’s Femail section in a piece written by Helen Weathers about how such a photo could have been classed as ‘inappropriate’ by Instagram.

This has surely been bad publicity for Instagram – who was the sad person who works for them that saw something wrong with such an ordinary little picture?

But the real story here is who made the complaint in the first place? I would imagine it is not someone who truly believed the photo would attract some bizarre paedophile but in fact someone who is simply jealous of Courtney Adamo’s success.

Unfortunately – as we have discovered when investigating these sort of stories in the past –   it often isn’t a stranger who does complain.  One likely scenario is that the complaint has come from a competitor – someone who Courtney knows of whose intention was to try to spoil her burgeoning boutique business.

In fact, quite often the complaint comes from someone much closer to home. For example, celebrities have been shocked to the core in the past to find out that the person feeding stories to the press about them is actually their nearest and dearest. Quite often the press is tipped off about a story by the last person anyone would suspect.

In this case it could be a ‘friend’ or an acquaintance who has become eaten up with jealousy or unpalatable as it might sound, even a relative (who might believe they are somehow acting in her best interests.)

What happened – and the fact Courtney Adamo has continued to receive some very unpleasant feedback from more jealous individuals who can only dream of such a family life – is one reason why I believe everyone should be fully identified on the internet (I am, for example…) If people were forced to stand up and be counted next to their comments (and if Instagram’s policy was to reveal exactly who made the complaint as well) then it would make people think twice before posting anything.

It would have been easy, given the publicity that this photo has evoked, for Courtney Adamo and her family to hide away. However, Courtney Adamo has in our opinion done exactly the right thing by fighting this jealous individual with publicity and doing a big three-page feature in the Daily Mail.

Because in doing so not only as she well and truly socked it to the bully who reported the photo to Instagram,  she has managed to gain massive free publicity for her online shop.

Until now I’d never heard of babyccinokids online boutique. But now I, like millions of readers, have done and it will only be fantastic news for her business.

Have you been the victim of bullying, trolling or some sort of online injustice? If you would like to discuss getting your story out there as Courtney Adamo did then let me know. Contact me in confidence for free advice here.