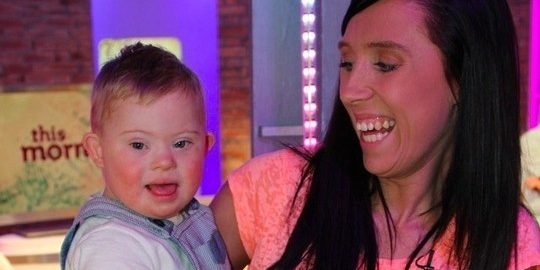 “I felt like the world’s most hated mum!” Courtney Stewart, goes on ITV This Morning to defend herself … 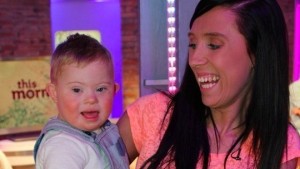 Courtney with Caleb on ITV This Morning

Following her story in the Daily Mail, Courtney Stewart appears on ITV This Morning to discuss the controversial photo she posted on Facebook – showing son Caleb playing in a washing machine…

Talking to presenters Eamonn Holmes and Ruth Langsford, Courtney told how her son climbed into the washing machine when it was unplugged with the door open and how she thought nothing of it when she uploaded the photo of him hiding inside onto social media. She simply believed she was sharing a ‘fun’ picture.

“Every day I make mistakes as a mother, every single day – as everybody does – and I learn from those mistakes,” said Courtney as she apologised for any offence caused.

However, at the same time, looking emotional as she was questioned, Courtney told how Caleb is ‘unbelievably precious’ to her and how despite the fact he has Down’s Syndrome, she tries her best not to treat him any differently to any other little boy.

The programme also showed the video of Courtney jumping up and down with Caleb on a bouncy castle. Some have claimed she was too boisterous with Caleb, particularly bearing in mind his disability.

But according to Courtney, Caleb – who showed how boisterous he is as he ‘rearranged the ITV studio set’ on air, adores rough and tumble play. She said: “He is really strong. He is really rough with me … on the move 24/7.”

As Ruth pointed out the Police and social services who visited after the photo and video emerged, have had no issues with her parenting.

But Courtney, who also has a little girl,  was trolled devastatingly. She believes it is because many people are ‘naive about children with Down’s Syndrome’ and ‘believe they are much more vulnerable.’

The presenters say they received thousands of comments from viewers. Some still believe the photo and video was not funny and Courtney should apologise.

But at the same time others believe many have been too cruel to Courtney, who is bringing up a Down’s Syndrome child at the age of just 21, and the whole issue has been blown out of proportion.

Do you have a story for ITV This Morning? If you would like to go on the show, contact me for free advice.