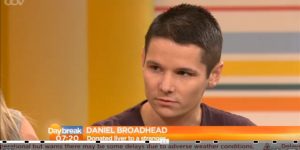 Since Daniel’s story about how as the first altruistic living liver donor, he saved the life of a 4 year-old boy appeared, life has been busy for the Broadhead family. 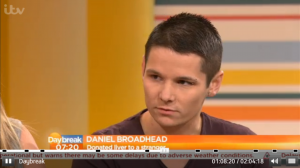 Having been filmed for a local TV news programme, Daniel, 20 and mum Karen made the trip to London to appear on popular breakfast show Daybreak.

There the pair were interviewed by presenter Lorraine Kelly and joined by Dr Hilary Jones – who described what Daniel has done as extraordinary.

Daniel, who has carried a donor card since he was 16, decided to go ahead with risky liver donation surgery last year. The six hour op left him with a six inch scar and it will be nine months until he is fully recovered.

Naturally mum Karen was horrified when Daniel told her of his intentions – and in fact she and Daniel’s dad begged him not to go ahead. They were worried he could affect his own health or even die on the operating table.

But as he told me when I interviewed him for the Daily Mirror – and as he explained on ITV Daybreak – the thought he has saved the life of a little boy will always be with him. He has no regrets and  if he could do it again, he would do.

We are delighted that appearing on TV shows such as Daybreak is something we can routinely offer to interviewees who come to Featureworld with their story.

And of course we were incredibly proud to watch Daniel and Karen on TV. Going on TV is often a nerve-racking experience but they spoke so well!

Read more about getting your story on TV.