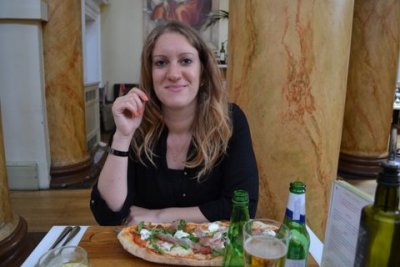 When Danielle Eccles woke up believing an insect had crawled into her right ear, she thought she was dreaming.

A few days later the NHS admin manager saw her GP and was reassured her ear was ‘clear’.

But in fact a ladybird had climbed in – and despite visiting the surgery 11 times over the next three years and being given 12 prescriptions for her increasingly blocked and swollen ear – no-one noticed.

That was until June this year when the perfectly preserved head of the ladybird suddenly fell out in her hand and she was finally referred to hospital to have the rest of the bug’s body removed.

‘It sounds funny but I thought I was going mad,’ says Mrs Eccles, 28, who is making a formal complaint to the surgery, ‘for three years I’ve been deaf in my right ear.

‘It’s made my life a nightmare. I just can’t believe no-one saw it. After all, it must be the brightest spottiest bug in the UK.’

Mrs Eccles, who lives with husband Neil, 32, a landscaper, first visited her surgery in August 2009 after feeling a strange tickling sensation in her ear.

She recalls: ‘A few nights earlier I’d felt sure a bug had crawled in my ear and was so relieved when my GP said he couldn’t seen any insect in there.’

But by May 2010 she’d gone back to the surgery six times.

‘I kept on getting ear infections and deafness. At restaurants I had to position myself at the table so my left ear was turned towards people speaking and walking along a road with someone I had to walk to their right so I could hear them properly. Neil got fed up having to say everything twice to me. ‘

She adds: ‘Before this I was rarely ill. But I’ve had to have two lots of time off work because the pain was unbearable and the antibiotics I’ve had to take ruined my immune system leaving me prone to lots of colds.’

Last year and early this year, she went back to the Elizabeth Courtauld surgery near her home in Halstead, Essex, a further five times.  She recalls: ‘One doctor did see something but diagnosed it as a “glob of wax.”

‘It was only in June this year when putting some ear drops in, head and jaws of a ladybird fell out of my hand that I recalled the night I believed the insect had crawled in.’

Mrs Eccles took the beetle head to show her shocked GP, who finally referred her to an Ear Nose and Throat consultant.

She says: ‘Waiting six weeks for the appointment was difficult as by the deafness and discomfort in that ear was getting worse.’

However, within five minutes the ENT consultant had removed the insect’s body.

She says: ‘We could clearly see from its spots it was a ladybird. I was instantly able to hear again and that was such a relief.  But I feel angry. I was made to feel I was making a fuss abut nothing and feel I should have been referred to a specialist much earlier.’

Dr Azhar Shaida a consultant ENT surgeon from The Harley St ENT Clinic said: ‘It would appear the ladybird was hiding behind some wax. A GP surgery does not possess the same level of equipment that an ENT specialist department has so it appears when doctors looked into the ear all they saw was wax. Because the insect body was encased in wax, it would have stopped the air getting to it so it wouldn’t have degraded.’

Do you have a quirky story to sell? If so contact us by using the quick enquiry form to the right of this page!