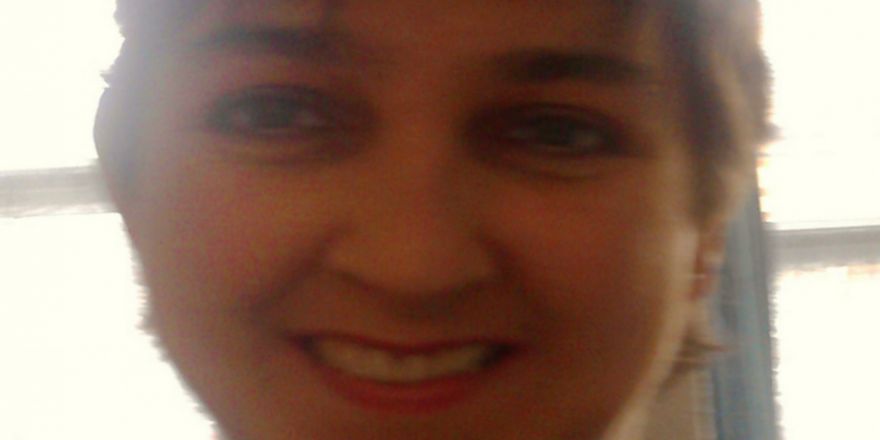 Why has the public fallen out with Tesco? 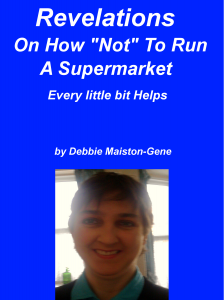 Debbie and her book…

For over eight years Debbie Bullock worked on the tills and in the entertainment department of Tesco Extra in Blackpool.

When she began her job, she loved it. Tesco prided itself on excellent service for the best price. Customer complaints were quickly dealt with and staff and managers worked as a team.

But she claims that over the next few years in order to gain more profits, Tesco confused prices. Deals that weren’t deals were rife.

Added to this she says a shortage of staff meant products didn’t reach the shelves on time. This meant suppliers, who paid for premium displays, were paying for empty shelves and customers were told products were out of stock, she claims.

And she believes Tesco treated customers and staff in a way she didn’t agree with. 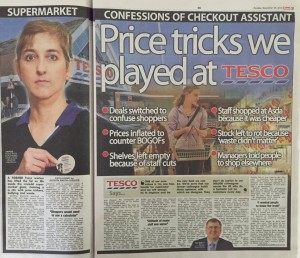 Debbie in The Sun on Sunday…

Incredibly, she took her concerns to her bosses and even the then chairman of Tesco – in 2012 she wrote to Philip Clarke warning of all the issues. But she says no-one listened to what she had to say.

A year later and completely demoralised, she was signed off sick with work related stress and eventually left.

But she wanted what she claims is the truth out there and decided to write a book.

In August 2014 – and before Tesco’s downturn in sales was fully revealed – she published Revelations of how NOT to run a supermarket under the pen name of Debbie Maiston-Gene.

In response to Debbie’s claims, Tesco says they strive to do the best for their customers, they do not agree with Debbie’s views and she does not represent the opinions of all the very many employees at Tesco either.

When Debbie came to Featureworld she didn’t want any money – she simply wanted her book publicised.

And her story about the problems she believes caused Tesco’s fall from grace, and why she wrote her book, goes over two pages of The Sun on Sunday newspaper.

Do you want to publicise an issue? Contact me, Alison at Featureworld, using the form to the right of this page>>>

READ Debbie’s story as it appeared in The Sun (£) …

A FORMER Tesco worker has lifted the lid on life inside the crisis-hit supermarket giant, claiming it is rife with price trickery, bullying and waste.

Debbie Bullock worked on the tills for nine years before being dismissed a year after writing to the chain’s then-boss detailing how badly she felt customers were treated.

She has now written a book about the retailer and today, talking exclusively to The Sun on Sunday, she reveals how she thinks Tesco has lost its once-loyal shoppers.

Tesco’s share price has roughly halved in a year of tumbling sales, profit warnings and a £250million accounting “black hole” being found.

Debbie, 47, is not surprised and says even staff began to abandon the chain around 2007, despite their ten per cent discount.

She said: “It wasn’t unusual to see Tesco staff still in their uniforms nipping into Asda after work.”

It was very different when Debbie started work at a Tesco Extra in Blackpool in 2005. She said: “We cared, the managers cared.

“Even if we had clocked off, we would be expected to greet a customer with a welcome smile. If a product couldn’t be found, a member of staff would be despatched to find it. If someone was unhappy with a purchase, it would be switched or refunded with a voucher and a grovelling apology.

“If the tills became busy, it was all hands on deck to ensure the queues didn’t grow too long.”

Debbie’s team were proud Tesco could not be beaten on service or price, but she began to suspect pricing was deliberately misleading.

Deals were switched to confuse shoppers

She said: “The problem was how to raise prices without customers noticing. The answer was to change prices so much no one could remember what the original price was.

“Tesco believed shoppers loved ‘deals’. Changing the deals often, sometimes daily, was a great way of making out the customer was getting a bargain but it was also a good way of confusing the prices.”

Soup was a classic target, Debbie claimed. She said: “You might see ten brands of tomato soup, many on different deals. Any customer would need to do advanced maths on a calculator to work out which deal was cheaper. We continually got new prices given to us by senior staff from head office.

“Few customers have the time to calculate which deal is best on so many lines.

“Bread or cakes would be on special offer. As these are staples customers buy regularly, their prices were memorable. Shoppers felt they were getting a great deal.

“But to compensate for the loss of profit, prices would be raised on staples people didn’t buy so often.

“Tins of tuna could go up by as much as 20p. This is why despite so many seemingly great deals, shoppers never really saw any reduction in their weekly shop.

“These deals were real money-spinners and pushed profits up.”

She said: “A DVD might be priced at £3 one day and £4 another, only to reappear bundled together as ‘£10 for two’. A label might say the DVD was reduced from Recommended Retail Price but that RRP might have only lasted for a matter of days.

“Often we had never seen a DVD sold at that price before.”

Debbie continued: “When a new Call of Duty game was released, prices on the old ones were always inflated or the older games would be bundled with the new release.

“A few customers would notice and I’d always advise they waited until the end of the ‘deal’, when prices would be much-reduced.”

Last Sunday it was revealed that Tesco had lost its long-held No1 spot for music, games and DVDs to Amazon, its share of the profitable market down five per cent.

She said: “I’m sure DVD sales were lost because there weren’t enough staff to keep shelves full.

“When a member of staff left, they were often not replaced. Customers would come to buy the latest DVD to find an empty shelf. There’d be hundreds sat in the storeroom but it was easier to say it was out of stock. There wasn’t time to search in the warehouse.

“Suppliers paid premium prices for their products to be prominently displayed but some never made it out of the storeroom. If a person responsible for re-ordering goods was off work, nothing would be ordered.”

Single Debbie, who still lives in Blackpool, added: “Once I saw more than 100 yoghurts and pots of cream dumped because no one got them on to the shelves.

“When the crate was brought out, everything was out of date. The attitude of senior staff was worse. It wasn’t coming out of their pockets so they didn’t care. Tesco made so much money, waste didn’t matter.

“Till queues meant customers would abandon trolleys in disgust.

“A lot of food was defrosted by then and had to be thrown away.

“When a customer complained, it wasn’t uncommon for a senior staff member to say, ‘If you don’t like it, you can shop elsewhere’.

“I saw a colleague help a customer struggling with shopping, only to be told by a boss, ‘You’ve spent five minutes with that customer. That’s enough — get back on your till’.”

When one shopper protested about a boss’s treatment of staff in 2012, Debbie felt it was time to act. She said: “A customer was shocked to hear staff spoken to in such a manner. The manager replied, ‘It’s none of your business. If you don’t like it, go elsewhere’.”

Debbie raised her grievances with her line managers to no avail. She wrote to Philip Clarke, Tesco’s then-CEO, but got no reply. She said: “To him I was a nobody.”

In September 2013, Debbie was signed off work with stress.

She said: “It was directly related to my job. I got a letter to meet with my bosses but it arrived too late so I missed the meeting.

“I wanted to rearrange it but they said as I’d missed a meeting, I was dismissed.”

Debbie now shops at Aldi and Asda. She said: “The price of my favourite yoghurt has been 99p at Aldi for two years. Their prices don’t confuse.”

In August Debbie’s book Revelations on How Not To Run a Supermarket was published, under her pen name, Debbie Maiston-Gene.

She said: “I didn’t want revenge. But I believed Tesco were ripping customers off. And I wanted people to know the truth.”

“ONE of our core values is ‘no one tries harder for customers’ and we will always try to improve and be the very best we can be. We’re sorry that our former colleague holds these opinions, with which we disagree. They don’t do justice to our 300,000 colleagues across the UK who do a fantastic job for customers every day.”

Story to publicise in The Sun on Sunday? Contact me using the form to the right of this page>>>