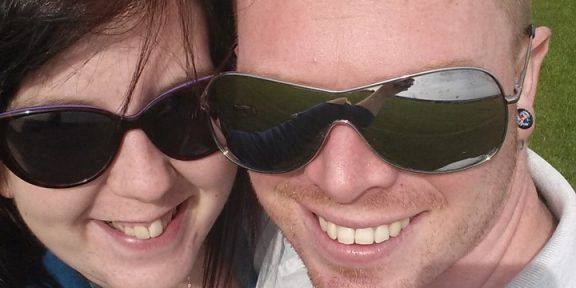 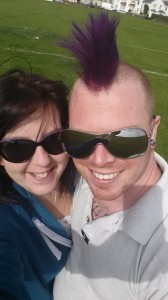 Hari and her partner

Hari came to me to talk about how she and her partner enjoy an open relationship.

Having already appeared in The Sun newspaper, I was delighted to gain the couple another deal. And their story explaining why both of them believe an open relationship works for them appears over two pages of Bella magazine.

Hari met her partner through friends online and got chatting.  But he was about to marry his partner, with whom he has three children with.

Nevertheless the pair began an affair and Hari’s partner finished the relationship with his ex.

But rather than stay together in a monogamous relationship, the pair decided to embark on an open relationship.

Hari’s partner says he has always found it difficult to remain faithful to one woman.

But before Hari met him, she found monogamous relationships stifling and dull after a while – she loved the excitement that came with being a mistress. 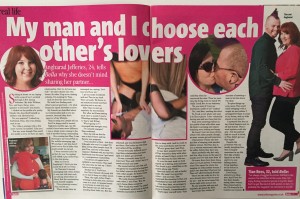 Hari and her partner in Bella…

Hari says the main bonuses of a relationship are variety – she never gets bored, and that as they don’t forbid one another seeing other people, there are no secrets between them.

In fact they run one another’s lovers past each other. In fact both of them will go on dating online websites and choose who their partner might sleep with.

The couple even take selfies or videos of themselves with the other person. But rather than feel jealous when her partner sends a pic of himself with another woman, Hari feels empowered as ultimately her partner is always consulting her.

Her partner also finds it arousing to see other men pleasing her.

What they don’t allow is for one another to have friends of the opposite sex or to date other people – other people are strictly for sex only.

They also always practise safe sex and get checked regularly for STIs.

Unsurprisingly the pair have tried swinging with couples they meet online. But they say the key to their open relationship is that they always come back to one another.

Do you have an open relationship? I would love to know why it works for you! If you and your partner would like to appear in a newspaper or magazine talking about your open relationship, contact me using the form to the right of this page >>>

Category: Sell my story to Bella magazine., Stories sold in 2014, Stories sold to a magazineBy Alison Smith-SquireDecember 19, 2014
Tags: Relationship stories
Share this post
Share with FacebookShare with TwitterShare with PinterestShare with LinkedInShare with WhatsApp