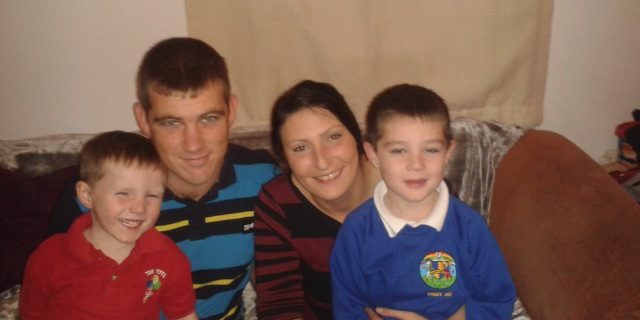 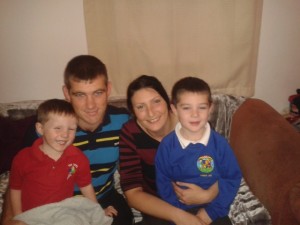 Parents Liza and Robert Coles came to Featureworld after being wrongly accused of harming their son.

When their son jumped off a sofa, they thought nothing of it. After all, he is a normal boisterous little boy.

And like all concerned parents, when he complained his foot kept on hurting, they took him to their local A & E for a check up.

But it was to be the beginning of a nightmare when a doctor claimed the injury had been inflicted.

Social Services were called in and to their disbelief, launched an investigation…

Do you have a story to sell to Take a Break or another magazine? Maybe you would like your story highlighted on television or in a newspaper? Simply contact me for free, confidential and no obligation advice…

It started as an ordinary day for mum Liza Coles, 28. But when son Corey-Jay hurt his foot, it was the beginning of every parent’s nightmare… 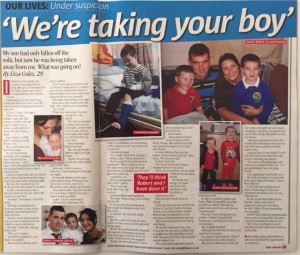 The family in Take a Break

Leaving my sons Corey-Jay, 4 and Daniel, 3, playing with toy cars, I popped into the kitchen to make a cuppa. My husband Robert, 25, was on a camping trip. After running round after the boys by myself all day I looked forward to a sit-down.

Minutes later I heard a scream. “Mum! I’ve hurt my foot,” said Corey-Jay. I ran into the front room find him hopping around in tears.

“Not again!” I said. Only a few days earlier Corey-Jay had jumped off the sofa and hurt the same foot.

“I just fell over,” he said, sobbing.  I put my arms around him to try and take the pain away.

But an hour later he was still complaining. So I rang my mum, Susan Day. “Can you drive us to the hospital,” I said, “Corey-Jay’s hurt his foot again. I want to get it checked out.”

I left Daniel with a friend. An hour later mum and I were sat with Corey Jay in the waiting room at our local A & E, Ysbyty Cwm Rhondda Hospital.

By now Corey-Jay said his foot was better.

“Typical,” I said to my mum, “we’ve come all this way for nothing.”

In the consultation room the doctor said: “We need to do an X ray just to check nothing is broken.”

Looking at Corey-Jay, he said: “I’m a paediatrician. How did you hurt your foot again?”

“I dunno. I just fell over,” said Corey-Jay. He tugged at my jeans and looked up at me. “Mum, Can we go home now?”

Corey-Jay had an X ray done. By now he was running around again as if nothing had happened.

So I was surprised when the paediatrician called me into a side room.

He said: “I’m afraid your son’s broken two bones in his foot. He’ll have to have his foot put in plaster.”

A few hours passed. Corey-Jay had his foot strapped up. We picked up our coats to leave.

Before we did another doctor came into the room. He pulled up a chair.

“I’m afraid you can’t go home tonight,” he said, “The first doctor – he doesn’t think Corey-Jay’s injury is an accident.

“He believes somebody – someone really heavy – put something on your son’s foot and crushed it.”

I felt sick. “But I told you what happened,” I said, in disbelief, “Corey-Jay told you too.”

He nodded as I spoke. “The other doctor raised the alarm. It means we have to investigate.”

My mum’s face went white when I explained I had to stay.

She put her arm around me. “Do they think you did it?”

The next day mum had got hold of Robert. He rushed to the hospital to find me in tears. “They’re accusing us of abuse,” I said.

He looked at me in disbelief. “What?” he said. We were both shocked, bewildered.

The doctor said: “Corey-Jay needs to be examined for any other injuries.”

I was horrified when a nurse told him to take his clothes off. The doctors searched all over his naked body for signs of bruises. I knew they wouldn’t find any.

A man from Rhondda Cynon Taf Social Services had arrived.  He took one look at me and said: “I’m sorry about this. We don’t believe there’s any cause to suspect abuse. But once one doctor has raised the alarm we have to go through procedures.”

I breathed a sigh of relief. Finally someone realised this hurt foot was simply an accident any little boy could have. This awful nightmare would soon be over… and we’d be home for tea.

I gasped. Surely doctors wouldn’t X ray a healthy little boy that much for nothing…

But after that set of X rays the doctor said they needed to do another skeletal X ray.

“To ensure there’s nothing we missed,” he said.

I went to protest. But Robert stopped me. “If we don’t let them do the X rays they’ll think we’ve got something to hide,” he said.

He was right – we had no choice. So with heavy hearts, we signed the consent forms. Later that day the social worker told me doctors had found no signs of any other injuries on the X rays.

“But the procedures are your son can’t go home with you,” he said. Robert and I clung together. I sank into a chair, as the tears fell.

My heart was beating fast.  “Are you taking him into care?”

The social worker shook his head. “Your mum could look after him,” he said.

Mum signed that Corey-Jay could live with her while social services investigated the doctor’s claims of abuse against us.

But as I told Corey-Jay he had to live with nan, he fell silent.

“I don’t want to,” he said stubbornly.

Thinking quickly I said: “Well, what if Daniel comes with you.”

I wanted to cry myself. Instead I said: “It will be an adventure for both of you to stay with nan. And it’s only for a while.”

The next four weeks went by slowly.

Mum had to give up her full-time job as a chef.  Because Robert and I were suspected of hurting our own kids, we couldn’t be left alone with them.

Robert and I lived each day in fear. What if one of the boys had another genuine accident and we were blamed. We knew any little thing could mean we’d lost both kids.

Mum, bless her, was wonderful.

“I know you didn’t do anything,” she said. She was sat in the kitchen watching the boys eat tea, “that’s why I’m going to stay by your side. So I can tell any doctor that questions anything that I was with you all the time.”

But it was hard living at her house and our own. Travelling backwards and forwards was tiring. And the boys just longed to go home.

Then one day Corey-Jay was mucking around when he fell backwards and bumped his head on the floor.

My stomach flipped when I saw a red mark and a spot of blood appear.

I started to cry. “They’ll think Robert and I have done it.”

Mum said: “No they won’t. I saw it was an accident. But we’ll go to hospital anyway.”

The nurses must have thought we were mad bringing Corey-Jay in over such a tiny bump. But over the next few weeks we visited with every little mark and scratch. Each time we painstakingly explained how they’d happened.

The man from social services visited regularly to watch how Robert and I were as parents.

As Corey-Jay and Daniel ran boisterously around my mum’s lounge, he said: “You’ve certainly got your hands full with these two.”

Robert and I were interviewed. Both the boys were interrogated. So was my mum and even my grandmother.

When the social worker asked Corey-Jay how he hurt his foot he couldn’t remember.

Then in February this year – five weeks after the first doctor pointed the finger of suspicion, my mum burst into the living room.

I was sat watching TV with the boys. She was talking to someone on her mobile. She had a big smile on her face.

“Someone’s got something to tell you,” she said. She put the phone on loud speaker.

It was our social worker.

I couldn’t believe it. I hugged Corey-Jay and Daniel. Robert and I were cleared of any sort of abuse. The nightmare was over.

Once we got home to our house in Pentre, Rhondda, Wales I thought we’d be back to normal.

Only it wasn’t that simple.

I felt angry that one doctor could have turned our lives upside down like that. I felt upset Corey-Jay had undergone so many X rays – totalling over 100. Guilty that I’d allowed doctors to examine him like they did.

Corey-Jay became clingy. Once he was happy go lucky. Now he didn’t want to leave my side.

Worst, once he used to enjoy going to nan’s. Now he said: “But I don’t want to stay there.”

I don’t blame social services – they had to go through their procedures. But I do believe two doctors, not one, should both suspect abuse before any investigation goes ahead.

We’re trying to put it behind us as a family. But it will be a long time before we can forgive and forget.”