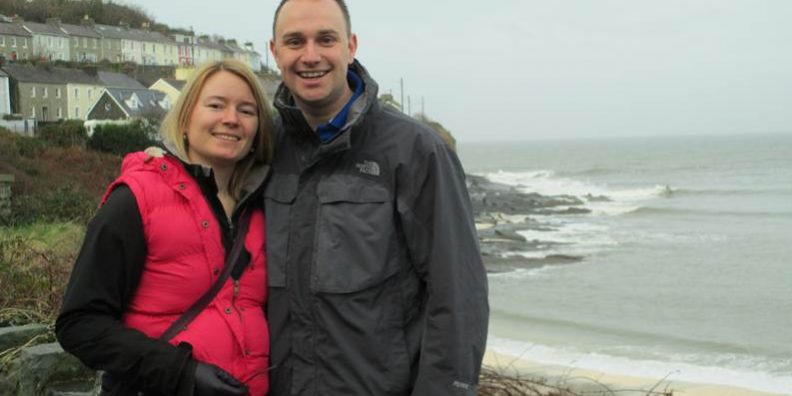 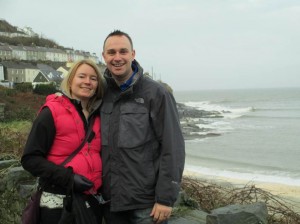 Meet Carolyn Blockley, 29, and her husband, Neil – they are the first couple to be expecting twins – and to undergo a pioneering new test for Down’s Syndrome.

At a routine scan revealed that Carolyn,  and her husband, Neil, were having twins but one of them showed signs of having Down’s Syndrome. The issue was that having an amniocentesis on the babies – who are identical – carried a risk of miscarriage that she would lose both babies.

However, Carolyn was able to have the brand new test for Down’s Syndrome. Currently it is not widely available on the NHS but it gives a more than 98% chance of accuracy (other tests are only 90 per cent at best and not available for multiple pregnancies) and because it’s a non invasive blood test, there is no risk of miscarriage. 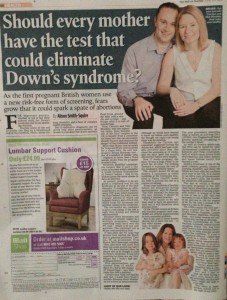 It works by screening DNA from the baby present in the mum’s blood.

Carolyn was lucky because a week after her scan she was able to have the Ariosa Harmony test – becoming the first woman expecting twins in the UK to have it.

Carolyn, who is four months pregnant with her first babies,  has now received the all-clear as the new £400 test showed no risk of having a Down’s Syndrome baby. But her doctor, Fetal Consultant Dr Bryan Beattie is now calling on the NHS to roll the Ariosa Harmony test out as routine to all mums to be. He says hundreds of healthy babies are miscarried each year due to amniocentesis and if introduced on the NHS it would save lives – and eventually money.

However, the test – which can diagnose other chromosomal disorders as well as Down’s – is controversial. Critics say it is the start of the journey towards the ‘designer baby’ and Hayley Goleniowska, whose second daughter Natty, 6, has Down’s Syndrome believes the test shouldn’t be ‘routine.’ 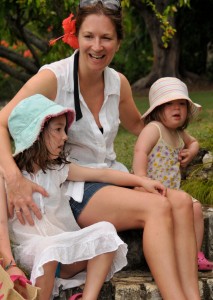 She claims by giving a test routinely it then becomes ‘recommended’ and if the test is positive, women are then immediately offered a termination. However, she says hospitals rarely ask parents if they would like to meet a family who have a child with Down’s or suggest another option is to keep the baby.

Meanwhile, Dr Beattie says even if an unborn baby is diagnosed as affected, parents can still go ahead with the pregnancy and prepare for having a baby with Down’s Syndrome.

Health story to sell? Contact Featureworld using the form to the right of this page>>