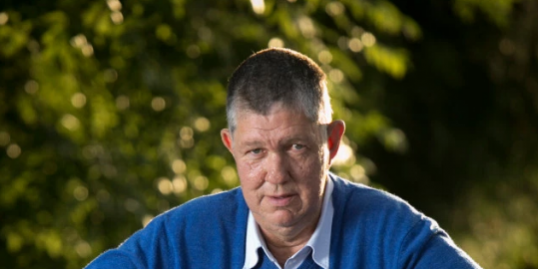 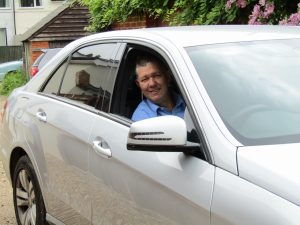 Motorist slapped with £50 ticket by ‘traffic marshal’ for polluting atmosphere

Kevin Taylor came to Featureworld to expose a ‘loony EU law’ after being fined £50 for taking too long to leave a parking space.

Kevin was shocked when as he waited to pull out into traffic, he got a tap on his window. A ‘traffic marshal’ then told him he was polluting the atmosphere by leaving his engine running for so long and slapped him with a £50 fine.

The little known  law for motorists deemed be ‘idling’ came into force last year. It was introduced in a bid to meet strict European environment targets to improve air quality.

But stunned Kevin, who claims he was driving a low-emission Mercedes said: ‘There I was with the busiest airport runway in the country to one side and a drive-thru MacDonalds restaurant on the other with their cars running. I said to the chap, “What about the planes on the runway and those queueing cars causing pollution? He then insulted me by saying they pay their taxes as if I do not.’ 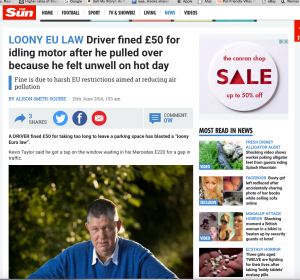 Kevin in The Sun…

Kevin, who works as a chauffeur, has since appealed against the ticket issued by Hillingdon council but lost.

He said: ‘It was a hot day and I felt unwell so I pulled over. I paid the meter and went and bought a drink. I turned on the engine to let the air conditioning cool the car down before I drove off. The road was really busy and I had to wait for lots of traffic to pass by. But the car was only running for a matter of minutes as I prepared to leave the parking space.

‘It seems I was fined because I took too long to turn out into the traffic.

‘I am not sure what I should have done but in future instead of parking up I will queue up at a drive thru restaurant with my engine on – or  just drive round and round instead.’

Several councils in the UK claim motorists should turn off their engines when stationary – and many modern cars are now fitted with stop-start technology which automatically cuts the engine when it is stationary for a few moments. However, the fines have been branded ‘yet another stealth tax’ by motoring organisations.

Read the full story in the Sun on Sunday

Do you have a story for a national newspaper? Angry about something unfair? Contact Featureworld using the form >>> to have your say…