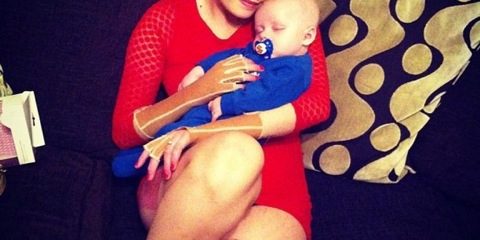 Danielle Foster’s story of how she survived a fire – but was left with terrible scarring on her arms – appears on the front page of THAT’S LIFE magazine.

Danielle Foster, 20, from Middlewich, Cheshire, was lucky to survive when her kitchen caught fire… 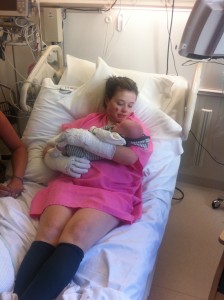 Kissing my newborn son, I carefully tucked him into his baby chair.

“There,” I soothed, “you have a snooze while I cook tea.”

Oscar was just three weeks old. He was born after an agonisingly long labour of over 50 hours – followed by a caesarean section. But when he arrived, weighing 8Ib 10Ib I knew straightaway all the pain was worthwhile…

Pouring some oil into a large saucepan, I placed it on the gas hob and switched it on.

Tonight I was going to make one of my partner David’s favourite meals – chilli beef deep fried in batter.

As I dipped the pieces of beef in flour, I heard the front door open.

“Just in time,” I called out to David, 22, who was back from work, “dinner will be ready in a few minutes.”

“Great,” he replied, “I’m just going to change and I’ll be right down.” 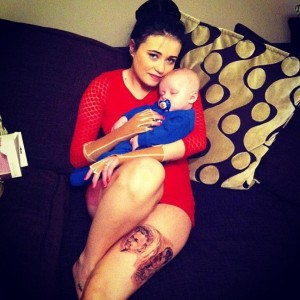 It was just as he went upstairs that I heard a strange bubbling noise.

The oil! I forgot I’d put it on. I turned round to take it off the hob – and as I did a huge whoosh of orange flames leapt from the saucepan.

They were around two foot high… for a split second time stood still as I wondered what to do.

The flames were touching the cooker hood.

Panic stricken I instinctively grabbed the saucepan handle. Cold water… that’s what it needed to get rid of the fire. 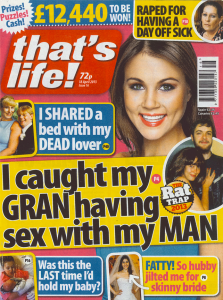 Flames danced in front of my face.  I leaned back as I carried the flaming oil to the sink. The fire was burning –  I could almost feel the heat singeing my eyelashes…

Quickly I placed the saucepan underneath the cold tap and turned on the water.

It was then there was a huge explosion. In front of my eyes the room was orange as the saucepan exploded into an angry inferno.

Instantly I could feel agonising heat melting my face.

I could smell burning. Was it my hair…

The flames licked my arms but it was as if I the nightmare were happening to someone else.

“David!”  I heard my voice scream for help. The kitchen was still bright orange.

Oscar! I had to get the pan out of the door… before the whole house caught fire.

“I’m here…” I heard David run down the stairs. Out of the corner of my eye I saw him grab Oscar and run out of the kitchen door.

Only then did the fire go out. Black smoke billowed out of the kitchen door.

The fire alarms were ringing. A neighbour was in our garden.

He’d rung the firebrigade. Within minutes I could hear the sirens.

Oscar was in David’s arms. He was crying, but he was fine. I felt like crying with happiness.

But I was aware that David was looking at me strangely.
“You’re ok…” he said to me. But as I looked down at my arms I felt sick with fear.

My skin was hanging off. I could smell my burnt skin. The pain stabbed at me – it was unbelievable.

I started to shake with the shock.  David had called my dad and sister, who live nearby.

They burst into tears when they saw me sat there…

By the time they arrived the paramedics were wrapping me up in bandages.

While I was still sat in the garden they put me on a drip and gave me painkillers.

I remember thinking what have I done?

I now know putting the pan of boiling oil under a running tap of water was the worse thing I could have done.

“Ideally, when you get a chip pan fire you should just get out,” explained one of the firemen, “or you put it out with a damp cloth thrown over the pan.”

I gulped as I realised I was lucky to be here. I could so easily have killed myself…killed all of us.

At our local hospital, a doctor came over. “We’ll have to transfer you to the Burns Unit,” he said.

I’d expected some bandages – and then I’d be able to go home.

However, at the Burns unit another consultant told me I’d need skin grafts. “The burns go very deep, right through to the muscle. The skin on your arms won’t heal properly on it’s own,” he said.  The skin would be taken from the top of my thighs.

But worse, I would have to stay in hospital away from Oscar.

I cried when I kissed Oscar goodbye. I’d seen my face – thankfully the flames hadn’t caught my eyes but it was burnt and blistered.

Only one thought was on my mind though.  Would I ever be able to hold Oscar in my arms again?

I could hardly move my hands and fingers. How would I feed him or change his nappies?

“Don’t worry, he’s got his dad with him,” said one of the nurses. She was right – and David was the best dad any baby could have – but it didn’t make it any easier.

But when I came round from the op, all I could think about was Oscar…

“Here you are…” David put Oscar in my arms. I felt so relieved – with physiotherapy I would get better.

“You make me want to get better, “I whispered into his fuzzy head.

After two weeks I came out of hospital. I dreaded coming back to a blackened house. But  incredibly there was no sign of a fire in the town house.

David had worked non-stop to replace the kitchen with a new one and clean up.

At first life was hard – but in fact looking after Oscar has proved the best physiotherapy of all. Seven months on, and although I still haven’t got full use of all my fingers, I am getting better every day. I’ve even managed to return to work as a hairdresser part time.

I will be scarred for life but those scars don’t bother me.

In fact, in a strange sort of way I actually like them. Because they are a reminder of how lucky I was to survive.

I’ve discovered few people seem to know what to do in case of a ‘chip pan’  fire like this. And I just hope telling my story will also help save someone else’s life.

As told to Alison Smith-Squire

Have you had a miracle escape from a fire? Telling your story to a magazine could earn you a fee and help others. If you have an inspirational story to sell to a magazine or newspaper, contact us using the form to the right of this page>>