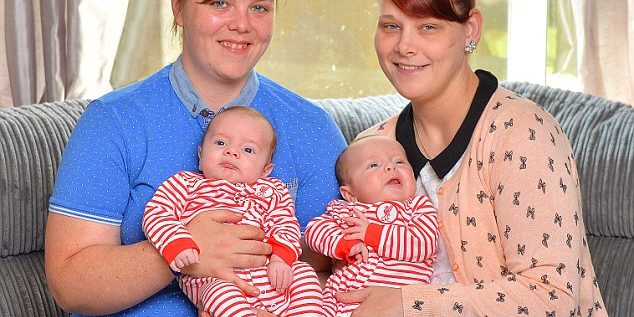 Sperm donor story:  Rebecca and Vikki Lomax tell how searching for a sperm donor on Facebook gave them the family they longed for – their story appeared in BELLA magazine… 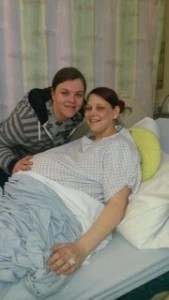 After placing their inspirational and quirky story about sperm donation in the Daily Mail, I was delighted to place the Lomax’s story in Bella mag where it appeared on the cover and over two pages!

You can read it here…

“Standing in our white wedding dresses, my wife Vikki and said our marriage vows. Finally we were Mrs and Mrs Lomax. And we couldn’t have been happier. 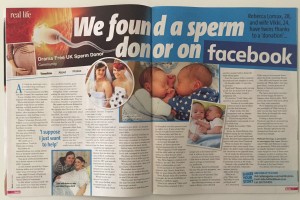 Vikki and Rebecca in Bella!

Until then I’d dated only guys – but as soon as I met Vikki I knew why I’d never had any truly serious relationship – I just hadn’t met the right woman.

Friends and family said they’d suspected all along I was gay.

Now we were a proper married couple and life was great.

Except for one thing.  We worried we would never be mums.

We know both our mothers felt sad we might not make them grandparents.

And although we went travelling and tried to make a life together just as a couple, we both longed for a family of our own.

Vikki and I looked into using sperm from a licensed clinic.

But the prices made us gasp.

One go at artificial insemination from donor sperm would cost £1500. It was money we just didn’t have.

Months went by. Every night I would search the internet for ways of finding a donor. But we wanted to find a special man to father our kids. And the thought of just advertising ourselves didn’t feel right.

Then one evening on Facebook I stumbled on a site.

The man who ran the site was called Kenzie Kilpatrick.

“Have a chat with some of the men on the site. But if you have any problems do come back,” he said.

He added he’d already donated to a number of women.

The next day, excited we began browsing the site. But we couldn’t get Kenzie out of our minds. A gay man who worked as a carer he said he simply wanted to help women who couldn’t have kids become mums. He was so kind, exactly the kind of man we hoped would donate his sperm.

“Will you be our donor?” we asked. We were thrilled when he texted back, “Yes!”

It was September 2014 and we arranged to meet for the weekend in a hotel near Kenzie’s home in Birmingham.

Vicki and I both want kids but we decided at the age of 27, as I am older and my biological clock is already ticking, I should go first.

I’d been tracking my menstrual cycle and knew that weekend I was due to ovulate and would be fertile.

As we travelled there, we were so nervous. What if we didn’t get on?

But we needn’t have worried. As soon as we saw Kenzie we knew he’d be a great biological dad.

Over a cup of coffee the three of us signed a contract. It stated Kenzie wouldn have access to any baby. We would not ask him for any money to help bring up a child.

He confirmed there was no family history on his side of any health issues and he had been tested for AIDS and sexually transmitted diseases.

Over the next two days Kenzie produced four sample pots over the weekend.

Each time Kenzie produced a pot I went into a private bedroom and artificially inseminated myself using plastic syringe. It was one to give kids their medicine but it worked a treat.

“Best of luck” said Kenzie as he waved us off home to Bolton on Sunday night.

The next fortnight was nerve wracking.

So I couldn’t believe it when even before my period was due I did a test and it was positive.

We sent Kenzie a photo of the positive test via Facebook. He was thrilled for us.

Over the next few weeks I got large really fast.

There is a history of twins in my family. But we were still shocked and thrilled when at the routine 12 week scan the sonographer turned to us and said,

‘Congratulations – you are expecting twins!”

It was a straightforward pregnancy.

Seeing Vicki hold them in her arms was wonderful. Knowing I’d made her a mum was a great feeling.

We counted their fingers and toes. They were both perfect and we celebrated by sending Kenzie a photo of them on Facebook.

We will be honest with our sons about how they are conceived. We want them to know how they were conceived and how much we longed for them.

But other than that Kenzie won’t have anything to do with their upbringing.

Some people might worry that our sons don’t have a male role model. But we are not worried about them being brought up by two women as we have many male friends and family to give them a man’s view of life.

We have since discovered Kenzie has tried to help 50 women have a baby. And our sons have eight half brothers and sisters. Incredibly he fathered all of them within four months – giving him the name The Sperminator.

But Kenzie assures us none of us lives near one another. So the chances of any of our kids meeting later in life and getting together are virtually nil.

Kenzie has also said he is no longer donating as he hopes to have his own child.

And we don’t rule out having another baby the same way with Vikki going through the same process.

Going on Facebook might be an unusual way of having kids. But we’re not ashamed of how we got our lovely family.

Kenzie’s generosity has changed our lives and we can’t thank him enough. If it wasn’t for Kenzie and Facebook we’d never have our gorgeous little boys.

Being mums is a dream come true. And we can’t thank him enough.”

Do you have a story about sperm donation to sell to a newspaper or magazine? Contact me for more details >>>

Category: Sell my story to Bella magazine., Stories sold in 2016, Stories sold to a magazineBy Alison Smith-SquireApril 11, 2016
Tags: FertilityInfertility and IVF stories
Share this post
Share with FacebookShare with TwitterShare with PinterestShare with LinkedInShare with WhatsApp