False rape claim story in the Mail on Sunday

It’s the ultimate nightmare of every parent of a son. Hilary Green came to Featureworld to tell how her 20 year old university son was falsely accused of rape …

Hilary, scientist and her husband, a retired MoD administrator, will never forget the day their son, aged 20, rang one friday night and  said he’d been accused of raping a girl at a party.

University student son Elliot had met the girl from Oxford University at a party.

There was some kissing and cuddling but nothing happened. The couple even met up again with a big group of friends. So it came as a shock when six weeks later out of the blue Police arrested him for rape.

Worse was to come when he was charged and the case went to court.

But very quickly his accuser was revealed as a compulsive liar. It later became clear the Police never checked out her story – which she had related differently to several people. She had even falsely accused another man of raping her as well.

Hilary, her husband, other son and daughter were all delighted he’d been cleared. But the damage was done. Hilary’s son’s confidence was shattered and although he has managed to scrape through his second year at uni, he had to give up his studies.

He now works in a shop, and while he hopes to resume his studies,  it has put intolerable stress on him and the wider family. 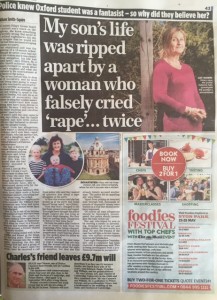 Hilary in the Mail on Sunday…

The family are now considering suing police because they believe the case should never have come to court and was a waste of taxpayer’s money. The woman, who will retain her anonymity for ever, was found to be a liar at every turn and yet officers just believed her – they never considered she might not be telling the truth. They didn’t want to listen to what Elliot had to say.

Hilary wanted to raise awareness in the press of how many young men such as her son are vulnerable to these false rape accusations – and yet many women who make the accusations are never charged.

Elliot, who was acquitted in January 2015,  did not want to be identified in the newspaper and so I arranged that although Hilary posed for photos, to protect his anonymity all names would be changed.

You can read Hilary’s full story in the Mail on Sunday newspaper.

Are you a young man whose life has been turned upside down by a false rape claim against you? Maybe this nightmare has happened to your husband, son or brother. If you would like free advice about gaining justice over a false rape claim – or clearing your name – contact me in confidence.