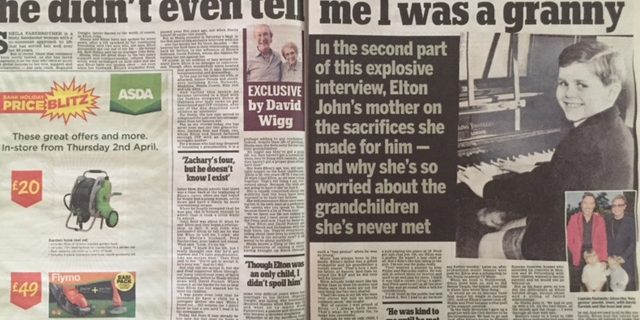 Sheila Farebrother has revealed how she is estranged from son Elton John. 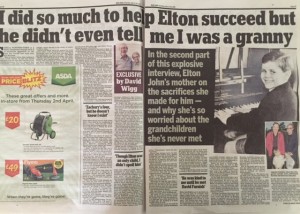 Sheila in the Daily Mail

But did she do the right thing in speaking with a national newspaper?

The Daily Mail has been running an exclusive interview with the mother of Elton John.

In the extremely well written articles, by David Wigg, she tells how she has never met her two little grandsons, Zachary, 4, and Elijah, 2, and indeed only discovered Elton had a child via surrogacy when she read the papers.

Sheila and Elton have not spoken for seven years, she says in the interviewees which she has approved for publication. This is since Elton demanded she cut two men out of her life – his former PA Bob Halley and ex-manager John Reid.

And she blames the influence of Elton’s husband, David Furnish, for turning Elton against her. After words were spoken between herself and Elton seven years ago, the pair have not been in contact.

And although Elton helps to support her financially, she is upset that she no longer sees her loving and hard-working son.

What makes these interviews extremely poignant is that Sheila Farebrother is 90 years old. Elton John is her only son and it is clear when you read the interviews that much of her life has been devoted to him.

Sadly, at Featureworld I find family feuds are not unusual. Quite often, as in the case of Elton John and his mother, people fall out over some seemingly small issue. They then don’t speak for years.

But while there might be some – indeed there are some comments on Mail Online saying Sheila should not be speaking out as she has done – incredibly the publicity does often bring people back together.

I have done stories in the past where two family members were not speaking. In these cases the interviewees felt that they had nothing to lose. Their relationships had broken down so much that even if the other person disapproved of the publicity, there was nothing more that could be lost. Often people saw it as the last resort and also a way of putting down in words how they felt – something they might not have previously done.

Quite often, where I have spoken to both sides, I had to interview them separately and certainly they would not meet for a photo. However, once the story has been read back, there has often been a softening on both sides.

This is possibly because for the first time people are often able to stand back and look at what happened. It is often quite clear the disagreement that split them apart, the row that has proved so insurmountable, is really small. Seeing the facts written down by a third person can make them realise both of them are to equally to blame.

In fact I can think of more than one case where a mother and daughter who did not meet for the photos for an article have – much to my utter astonishment – ended up doing a follow up piece, going on a programme such as ITV This Morning together.

Ironically, publicly airing a family feud has healed their rift. It has been the first step towards putting the past fallout behind them.

We might never know what happens with Elton John and his mother. As Sheila poignantly says time is running out for a reconciliation. She says: ‘When you get to 90 you think: “Well, how much longer have I got?”‘

But as I say to interviewees, when you look at all the terrible things that go on in the world – and being a journalist you particularly hear of awful stories day in and day out –  life truly is too short to spend it not speaking to someone.

I can only hope that as with many of my interviewees who vow never to speak again but do reconcile, that Elton John will read his mother’s story and make contact.

Have you fallen out with a relative? If you have been involved in a family feud and feel exploring doing publicity might be a good idea, do contact me for free and confidential advice.