Some sad news about one of our interviewees – Laura Hymas, who has died. 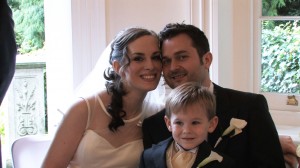 Laura, Ben on their wedding day with Jacob

Laura and her then fiance, Ben, came to sell a story via Featureworld in 2011. A few months earlier, on Christmas Eve 2010, Laura, who with Ben had son Jacob, was given some devastating news that she had a brain tumour.

British doctors said there was no cure and gave her just 12 months to live. But determined to see Jacob grow up as much as possible, Laura and Ben launched a campaign to raise enough money for her to have ground breaking treatment in the US.

The couple organised an extraordinary appeal – Featureworld placed their story in the Daily Mirror newspaper and Bella magazine. Meanwhile, their request went viral on Twitter and Facebook.

The £75,000 treatment was controversial and attracted critics who claimed it wouldn’t work. But Laura got better and a year later the cancerous tumour had gone.

Last year the couple finally married. But three weeks later at a routine scan Laura got the terrible news that the tumour had returned and was aggressive.

Poignantly Laura was able to write cards and letters to give to Jacob when he’s older.

She went to stay in a hospice and after ten days, with Ben at her side, peacefully passed away.

In an article written by Jenni Horn in their local paper, The Kent Messenger, Ben reveals when they discovered the cancer had returned, they tried to get the treatment repeated.

“We were in contact with her doctor in America,” he says, “and he applied for the legal right to treat her again but this was declined.”

However, he has no regrets about the treatment – in the end around £100,000 was raised. “There was a lot of criticism but I don’t feel like we made any mistakes. The treatment didn’t cure Laura but it gave her another two years.”

This meant Laura had precious time with Jacob, now aged 4. “Laura got to hear Jacob say he loved her, so it was all worth it.”