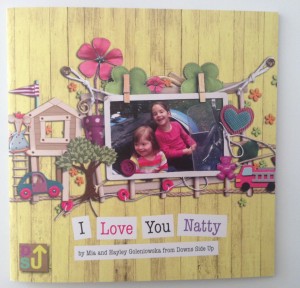 So we were delighted to receive this booklet – I love you Natty. Several years ago we placed Hayley Goleniowska’s story about her daughter Natty, who has Down’s Syndrome, in The Sun newspaper. She then went on to feature in Bella magazine, and Mail Online.

Since then Hayley’s blog, Downsside Up has proved hugely popular in helping to educate and inform others about Down’s Syndrome.

Now mum Hayley has written and published a delightful book with Natty’s older daughter, Mia. With stunning family photos, this inspirational booklet, which costs £5.99, will surely help any other family wanting to find out more info.

A few weeks ago Jim Higgins appeared via Featureworld in the Daily Mail. He had been trying to clear up some old fencing and brambles from a footpath at the bottom of his garden.

However charity Sustrans, which own the footpath, reported Mr Higgins to the Police over claims he has removed a Victorian fence and he faced being charged.

In the latest twist Featureworld can reveal Mr Higgins has since joined Sustrans as a volunteer so he can continue tidying up the area. However, sadly despite a petition being started up by local people who are upset about the way he’s been treated, he is still being investigated by the Police over the alleged theft of the fence.

Debra’s story about how she had life saving surgery for appendix cancer appeared in a New Year’s edition of the Daily Mail. At that point the mum believed she had been given the all-clear and she was looking forward to 2014.

But just a few days later scans revealed the cancer had returned. Friends and family launched an appeal to raise enough money for Debra to travel to Belgium to have ground-breaking treatment that has helped others to survive.

The good news is the charity set up, Debs Fight For Life, has now raised the funds and in the next few weeks Debra is due to go to Belgium for this treatment. Featureworld wishes her all the very best.

Finally some wonderful news! Ellie Fairfax, who was featured in the Sunday People and Daily Mail newspapers about how she was having a baby for sister Siobhan Terry.

Ellie made the offer to Siobhan, who has a little girl but wanted another baby, after she contracted cervical cancer and was left infertile.

We are delighted to announce following a water birth with just gas and air, Ellie has now had a little boy weighing 6Ib 5oz who is absolutely gorgeous…

We will be updating with further news soon!

Do you have a story to sell to a magazine, newspaper or TV.  Selling your story via Featureworld is not like approaching a publication or big impersonal agency yourself. We pride ourselves on our personal approach. Simply contact Alison directly here.