Whenever I sell a story to a newspaper for an interviewee, one of the first things they naturally ask is when will it be printed. 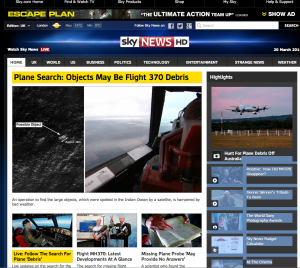 That question is always difficult to answer.  Of course some newspapers do plan features in but ultimately when any article makes it to print depends on many factors – not least how much space is in a paper and what other stories it is competing against for that space.

So my usual answer is to tell that interviewee when a paper has said they hope to run their piece is to clarify any date with this comment, that ‘if a plane crashes then your story could be held out and run at a later date…’

The truth of this statement has certainly been demonstrated over the past weeks with news of missing Malaysia’s airline’s missing Flight MH370 dominating not only the UK headlines but those worldwide.

The huge amount of coverage given – rightly in our opinion – to this incredible story will have kept other stories out of papers.

Some have criticised the press for ‘speculating’ on what has happened to Flight MH370 although in fact, much of the time newspapers and news sites have simply reported statements (which have often been confused) from various officials.

However, it is also true to say that the thirst for information from the public has been so intense – Featureworld is quite sure that traffic to news websites will be seen to have noticeably increased since this plane went missing – that it is not surprising so many column inches have been devoted to it.

I don’t believe being fascinated by this story is anything to be ashamed about. It is in our nature as humans to be intrigued, to want to know more, to try to understand what happened to this flight.

Whether we like this part of our human nature or not, everyone can relate on some level to what has happened. What really happened with that aircraft? What must it have been like to be a passenger on Flight MH370? Did any of those passengers know what was going on? And we can all empathise with the dreadful, awful suffering those relatives must be going through. Any mother would go demented and be pushed to the edge of sanity as one devastated mum was, crying as she broke down with grief, shown being shockingly ushered out of a press conference. These are the thoughts of a normal person – to not think them is to not be human.

As demonstrated, true-life human interest stories are always much more interesting than anything any movie or book can dream up. That is something we at Featureworld, an agency specialising in selling real-life stories to newspapers, magazines and television know.

This is why any development on this story is immediately headlining on news websites around the world. This is why so many people will switch on their TV news to see the latest report.

“I’d bet there isn’t a thriller writer in the world who isn’t guiltily wishing they’d dreamed up a scenario like this,” said writer Stephanie Merritt recently in The Observer, “experts on all sides repeat the word “unprecedented” and it is precisely this sense of mystery that keeps us glued to the 24-hour news, awaiting the next instalment.”

Admitting she is a chronic aerophobic – and part of our fascination with this story is surely that as we board a plane so many of us feel a creeping fear that flying is somewhat ‘unnatural’ – she adds: “I’ve taken a number of courses over the years designed to help people overcome their fear, most of them based on the idea that knowledge is power. Commercial pilots and aviation engineers with 30-plus years’ experience stand in front of 100 quaking phobics and patiently explain why your worst nightmares just couldn’t happen in modern aviation.

“People asked about systems failures, security breaches, loss of power, fires, depressurisation, midair collisions, bird strikes, pilot training, landing-gear failure … Our pilots, with thousands of hours of flying and training between them, reassured us on every point. And yet it seems an entire plane can be made to vanish from the skies, just by flicking a switch to cut off communications. None of us thought to ask about that.”

Certainly it is the sort of story many of us are checking the latest developments every morning when we wake up and last thing before we go to bed.

And whatever happens – whatever wreckage is discovered, whatever transpires from any black box found – it is a story you will still be reading about for years to come.