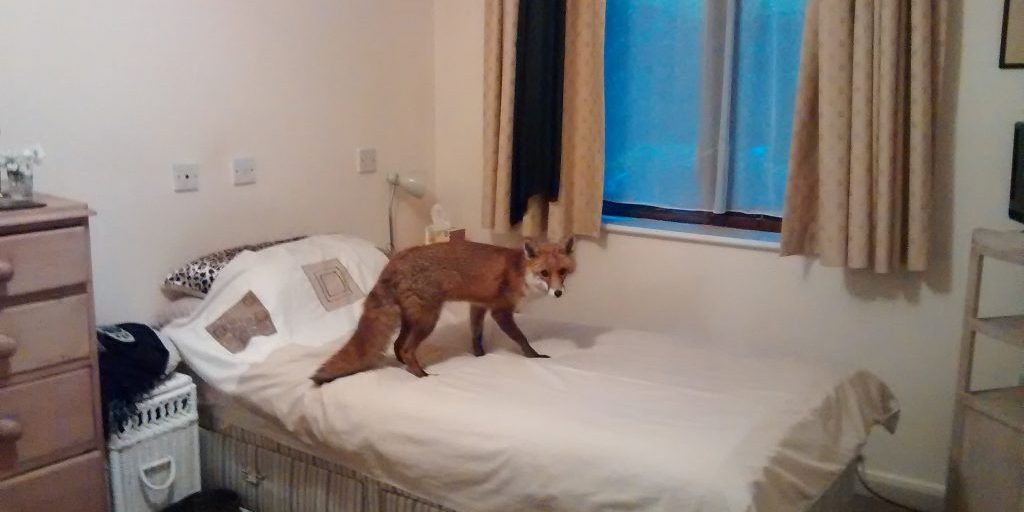 Get out you naughty fox! Story in the Daily Mail… 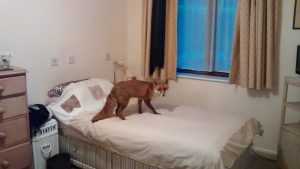 Marion Owen came to Featureworld recently with an extraordinary set of photos. After a weekend away Marion Owen was looking forward to sleeping in her own bed.

But a crafty fox had the same idea. Unbeknown to her as she brought her cases in through the front door of her flat in St Albans, Herts, the fox spied the perfect place for a nap.

And as the estates manager, 64, unpacked, the unusual intruder was cosying up on her duvet.

She said: ‘It was such a shock to see a fox relaxing on my bed. I was about to unpack when out of the corner of my eye I saw something move in the bedroom.

‘To my amazement there was this large fox making itself at home on my bed. I went to the door and shouted, “Get out of here you naughty fox!”

‘That made it jump off the bed but it was still prowling around the bedroom, peeking at me from behind the bedclothes.’

The quick thinking divorcee and mum of one managed to take a few snaps on her phone of the creature. ‘My hands were shaking,’ she says, ‘but I realised it was too frightened to come out of the room as it meant running through the door past me.’

The brave grandmother of one ran out of her one-bed apartment round to the outside of her bedroom window. ‘I hammered on it loudly. The noise startled the fox enough for it to leave my bedroom. Even then it simply sauntered out of the front door as if nothing had happened.’

Incredibly the fox then went and sat in the flat’s communal gardens. 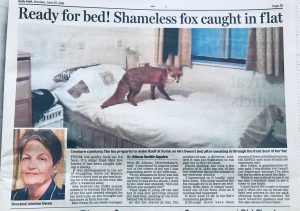 Marion’s story in the newspaper

Although there have been reports of foxes attacking humans, the RSPCA says such attacks are extremely rare.

However it’s possible that urban foxes are becoming more accustomed to humans and getting braver. The animals have become so successful that some estimates now put the growing population at as many as 28 foxes per square mile.

Marion said: ‘Although I was shaken I wasn’t too frightened because I’ve seen the fox so often around the flats. I can only think it got in as I left the door open when I unloaded my car.

‘While it was a shock to see it on my bed, I wouldn’t want to see it come to any harm. I don’t know if it’s male or female but it often sits out in broad daylight and potters in the carpark, sleeping under the vehicles. We have beautiful gardens and the fox also seems to love them.’

Have you taken an amazing photo? Contact Featureworld and I can tell you straight away if your photo or video is suitable for publication and how much it might be worth.